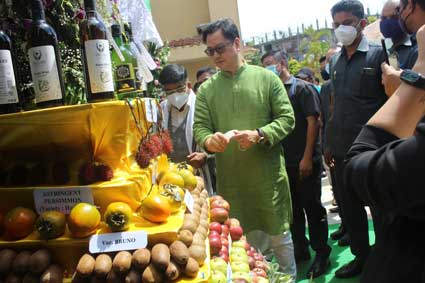 Atmanirbhar Arunachal should be achieved: Rijiju

ITANAGAR, 23 Sep: A weeklong ‘Vanijya Utsav’ got underway with the inauguration of the festival by union Law Minister Kiren Rijiju in the presence of union MoS for Education Shubash Sarkar and other dignitaries at the Dorjee Khandu Convention Centre here on Thursday.

The festival is being organized by the commerce department, in collaboration with the director general of foreign trade (NER) and the Coffee Board’s Guwahati zonal office to commemorate the 75th anniversary of Indian independence and to showcase the potential of the exporters and manufacturers.

In his address, Rijiju said that, “along with Atmanirbhar Bharat, Atmanirbhar Arunachal Pradesh should also be achieved.”

“The state has lots of resources and opportunities to flourish in trade and commerce,” he said, and called upon the people to “grab the advantage of all developmental schemes under central and state governments.”

He gave assurance that he would not let “any scheme or paper from the state” be left pending at the Centre. He further said that “no one should give or take money in order to get any scheme sanctioned as the Modi government does not support such practice.”

Exhibition stalls set up by various departments and local progressive farmers are the main attractions of the festival. (DIPR)