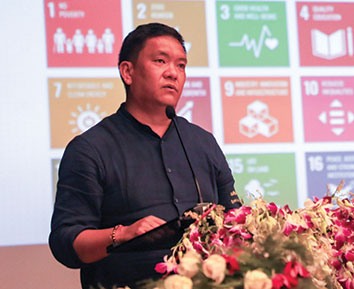 Addressing the concluding session of the two-day conference of deputy commissioners on SDG here, Khandu informed that “the SDG platinum running trophy will receive Rs 2 crores, followed by SDG gold for Rs 1 crore, SDG silver for Rs 50 lakhs, and finally, the SDG bronze for Rs 25 lakhs.”

“The winners will get these additional untied funds to the district on the basis of incremental improvement,” he said.

The CM further informed that “the basin-wise action plans for SDG would be classified as per five river basins of Tirap, Lohit, Subansiri, Siang and Kameng.

“Each basin group would be assigned with two ministers, including senior level officers, for support and monitoring,” he said.

Advising the DCs to focus on tourism, hydropower, agriculture and natural resources sectors, he said the government “will be working on a long-term policy and formulation of budget announcements as per the SDG goals.”

The CM informed that the DCs will be empowered to write the ACRs of all district level officers, so that they are made accountable and responsible. “This decision will be taken up in the upcoming cabinet meeting, with empowerment of panchayat as another important decision to be taken up,” he said.

He instructed the DCs to “involve panchayat members in every decision-making” and requested them to conduct regular meetings with the heads of departments on all development agendas.

The CM emphasized on increasing the state’s cumulative score of SDG from the present 60 to 68 by March 2022, and to 76 by March 2023. He requested the DCs to devise strategies to achieve the target.

Khandu pointed out that, “with regard to SDG, the performance under six goals, such as hunger and nutrition, water and sanitation, etc, has been much better,” and emphasized on “improving the ranking for eight other goals, such as health and wellbeing, quality education, etc.”