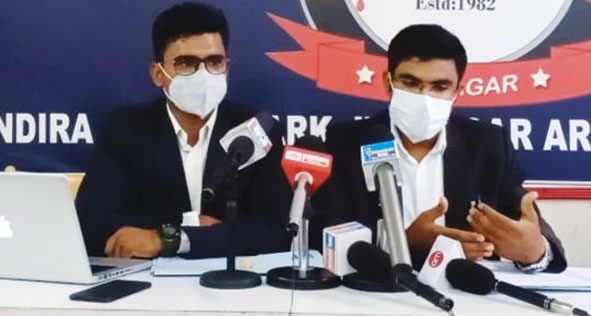 ITANAGAR, 25 Sep: The management of Mughal Gardenn restaurant here filed an FIR against Tako Kaming Tadar and Consumer Right Organization (CRO) president Achu Bagang on Friday at the Niti Vihar police station for defaming the restaurant and encouraging Tadar to demand money from the restaurant, respectively.

Addressing reporters at the Arunachal Press Club on Saturday, legal advisors of Mughal Gardenn, AH Siddiky and M Khan informed that Tadar had visited the restaurant on 7 September and, after he felt that the food

that he had consumed was not good/stale, he made a video and uploaded it to social media.

“Following the video, CRO president Achu Bagang approached Tadar and he filed a complaint with the CRO against the restaurant. Soon after, the CRO served a demand notice, along with a pharmacy bill and the restaurant bill (of 7 September) to the restaurant management to respond within 24 hours, while claiming that after consuming the food of the restaurant, Tadar had fallen ill due to food poisoning,” Siddiky said, adding: “However, they failed to produce any medical prescription for the food poisoning to justify their claims.”

He also informed that on 12 September, Bagang along with his CRO team and Tadar came to the restaurant to settle the matter and demanded Rs 50,000.

They claimed that when the restaurant management called Bagang on the same evening to discuss the matter, Bagang reportedly suggested that “the restaurant give Tadar an amount of Rs 35,000 to Rs 40,000 in cash or Tadar would make another video and make it viral or may explode the restaurant with a bomb.”

Unhappy over the statements of the CRO president, legal advisor Khan said that the CRO is an organization for providing justice and it should have solved the matter mutually after examining both the parties.

They also informed that the food safety unit under the health services directorate in Naharlagun has already disposed of their case after imposing a fine of Rs 5,000 against the restaurant and suggested that “the restaurant take corrective action to rectify the recurrence of such mistakes” on 13 September.

Khan informed that the restaurant management also filed an additional FIR against Tadar at the Doimukh police station on 16 September “for extortion and kidnapping the driver of their vehicle.”

On 15 September, Md Khurshid Alam Ansari from the restaurant management went to Doimukh to meet Tadar for a mutual settlement of the matter, which was resolved and an agreement was signed by both parties.

“After that, Tadar insisted that he be dropped off at his residence in Karsingsa. Accordingly, Ansari told his driver to drop Tadar. However, Tadar snatched the car keys and the mobile phone of the driver and did not allow the driver to return and started demanding Rs 20,000 as compensation,” the legal advisors claimed.

When contacted, Bagang denied the allegations, saying that he helped Tadar as a consumer only and informed him about his consumer rights.

Regarding the 12 September meeting, he said that the CRO team went there as a mediator to sort out the matter mutually.

He also denied having any knowledge about the demand for money but suggested that the restaurant management compensate Tadar as per their agreement.