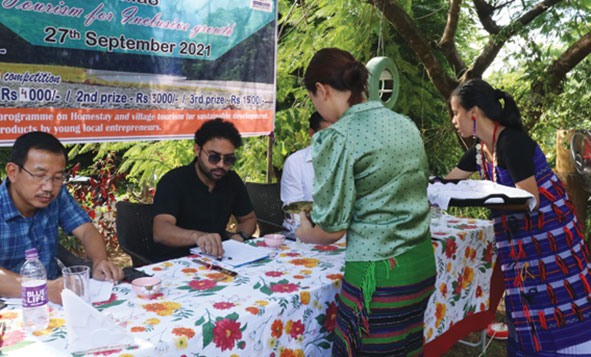 ROING, 27 Sep: World Tourism Day was celebrated in Lower Dibang Valley (LDV) on Monday by the district administration and the tourism department, along with tour operators, tour guides, tourism students, homestay operators, tourism stakeholders and others.

The three-day celebration commenced with a cycling event, which was flagged off by LDV SP James K Lego from Everester Tine Mena’s resort.

Lego encouraged the participants to follow all safety measures during the race.

The SP also inaugurated Mena’s adventure camp on the occasion. Adventure sports like zip-lining, Burma Bridge, balancing and catwalk were organized at the camp.

Later, District Tourism Officer T Tapak created awareness about tourism and spoke about the importance of the celebration.

Tour operator Neharika Sehgal Umbrey spoke about “rural tourism and the importance and career in tourism.” She also spoke about the struggles one can face while trying to make a mark in the field.

The programme, which was organized by RGGP’s travel & tourism department, was attended by all the students, faculty members, HoDs and the principal of the institute.

An online photography competition among the students was held as part of the event.

RGGP Principal Taba Tath spoke on the importance of tourism, and advised the students to “focus on their academic activities, as well as developing skills to be entrepreneurs of the future.”

In Miao in Changlang district, the Arunachal Pradesh Tour Operators Association (APTOA) and Arunachal Tourism organized a programme at Worang Hill to celebrate the day.

Miao ADC Sunny Singh, who attended the programme, said, “The varied cultural richness found here in Miao subdivision can be found nowhere else in the Northeast.”

Thanking the local tour operators, homestay owners and young entrepreneurs, Singh assured that the local administration would provide full support to all stakeholders “in order to take tourism further towards sustainable economic development.”

The APTOA’s eastern Arunachal secretary Phupla Singpho dwelt on the potential of tourism and stressed the need to take into confidence all communities to work together. “Tourism is not for a single operator, homestay owner or a guide. For tourism to succeed, all communities living together need to work as a team,” Singpho said.

Earlier in the day, a local cuisine competition was organized. The first prize was awarded to the Singpho tribe for wah san gibow (pork chutney); the second prize went to the Lungchang tribe for wak ngam atok (pork stone fry); and consolation prizes were shared by the Tikhak tribe for wuungamboot chut (chicken boiled with rice powder) and the Lisu tribe for khakha ngwa mitsi (fish with bitter brinjal chutney).

Among others, the programme was attended by EACs AJ Lungphi and Namrata Bhatt, TIO Anita Yakang, tour operators, homestay owners and entrepreneurs.

Addressing the participants, Yingkiong ADC Kabit Apang urged the youths of the district to take up tourism-related activities as the district is bestowed with huge tourism potential.

“The district is now well-connected with NH 513 and NH 52 from Pasighat in East Siang district, where a newly-built airport has been made operational,” he said, and advised the students to be “ambassadors of tourism and work towards prosperity of tourism for improvement of the living standard of the local people.”

During the programme, the prizes for essay writing competition were presented. Class 12 (science) student Mini Peyang won in the senior category and Class 10 student Elina Panggeng won in the junior category.

Earlier, District Tourism Officer Tater Mize spoke about the potential of Upper Siang as a tourist destination. “The district, having an area of 6,118 sq kms, is endowed with majestic snow-capped mountain, magnificent rivers, mesmerizing lakes and an abundance of flora and fauna,” he said, and requested all stakeholders and the local community to “work together for the prosperity of tourism in the district.”