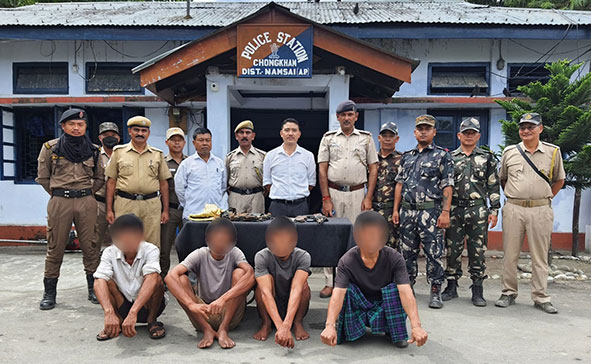 NAMSAI, 29 Sep: Following complaints of extortion, the Chongkham unit police have arrested four people, including an active cadre of the Eastern Naga National Government (ENNG) and seized a semi-automatic rifle and ammunition from their possession.

“On 25 September, gaon burah of Chakma Basti-I, Sushil Chakma made a complaint with the police that on the previous night (24 September), a gang led by an unidentified Khamti person, and his accomplices Khokho Chakma and Anu Chakma, and about five to six other gang members with sophisticated weapons, who have been looting and extorting money from many people, planned to loot him as well. Fortunately, on the night, they were not carrying sophisticated weapons and they had to abort the plan. Had they possessed that weapon, they could have executed their plan on him,” the police said.

On receiving the complaint, a case was registered under section 395/398 IPC and OC PS Chongkham, SI Ajay Kumar took up the case for investigation.

During the course of investigation, alleged accused Khokho Chakma (30) and Anu Chakma (28) were arrested on the same day the complaint was received (25 September) and were interrogated.

On thorough investigation, it was ascertained that the Khamti man, who was involved in the offence was one Chow Kinta Khamho (37) of Chongkham, who is also an active cadre of the ENNG.

Accordingly, sources were engaged and on 28 September Khamho was arrested from Mankao village.

Another person, Maracho Chakma (37) was arrested from Chakma Basti No. 3.

“We had intelligence report that the group was in possession of a semi-automatic rifle. All the arrested accused were thoroughly interrogated and ultimately Maracho Chakma (37) revealed that the weapon was hidden under a big tree in a ginger garden in Jaliban area under Chongkham police station,” the police said.

As such, a police team under the command of SI Kumar was sent, along with Maracho Chakma and after thorough search of the area, the police team recovered and seized one M22 rifle, 35 live rounds, two magazines, one magazine pouch, and a mobile phone (of Chow Kinta Khamho).

At present, all four arrested accused persons have been lodged under police remand after production in the Court of Judicial Magistrate First Class, Namsai.

Further investigation of the case is on.