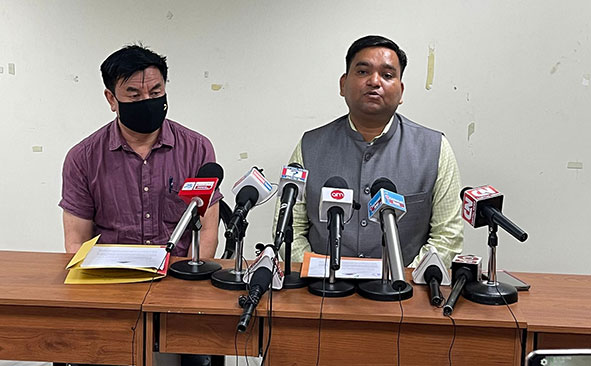 The Nangkar brothers were accused of gross irregularities and disbursing land compensation amounts fraudulently at an exorbitant rate without taking proper approval from the government.

“The accused have conspired and conveyed the approval of an exorbitant amount of Rs 11, 91, 700 per bigha of land to be paid to the beneficiaries of the railway project without taking proper approval of the government,” SP Tiwari said.

“The said rate was fraudulently inserted by the then director of land management in the government official documents as an approved rate. The then deputy commissioner of East Siang had disbursed the amount to the tune of crores, causing heavy loss to the government exchequer,” Tiwari added.

The SP further disclosed that Ojing had suppressed the recommended rate of the board constituted by the then East Siang DC for fixation of land rate, to be acquired for the railway’s project.

“He had used an internal ‘in-process’ communication of the Assam government (between CO and SDO, Jonai) and proposed the rate of Rs 11,91,700 to the government, without taking approval of the DC,” he said.

The SP also informed that “at the directorate level, his (Ojing’s) brother and co-accused Ennyo (then director) had taken approval of a different set of rates for land acquisition by the government. Later, he (Ennyo) inserted handwritten exorbitant rates in the note sheet and fraudulently communicated the rates to the East Siang DC. After getting the fund, then DC Tamiyo Tatak disbursed the compensation without following due process.”

Informing that the two accused were absconding and evading arrest for the last six months, the SP informed that they had also approached the Gauhati High Court, Itanagar Permanent Bench for pre-arrest bail, which was dismissed.

Both accused also approached the Supreme Court by filing a special leave petition for pre-arrest bail and got interim relief in the month of May.

As per reports, the Murkong-Selek to Ruksin Railway’s land compensation scam involves around Rs 106 crores, out of which Rs 72 crores have already been disbursed to 43 beneficiaries. So far, three alleged accused have been arrested in this connection.

“We are trying to establish money trails and will write to the government for the recovery process,” SP Tiwari added.