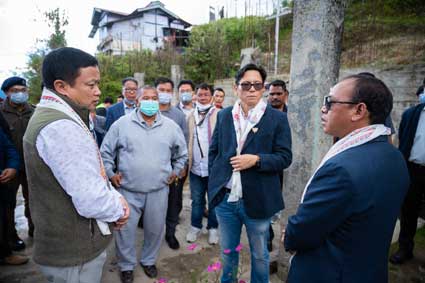 Since October last year, controversy has been brewing over the Tawang district administration’s decision to order the halting of the construction of a church in the headquarters.

The administration had issued an order stating that the construction of the building by the Christian Revival Church began illegally, and alleged that the land had been encroached on by the organization.

Indigenous faith bodies of the state, however, backed the administration.

In view of the rising tension, the state government formed the committee headed by Natung and including MLAs Nyamar Karbak and Nyato Dukam in November last year to study the matter and find a solution.

All three legislators met representatives of various church organizations active in the area and members of the Joint Action Committee (JAC) and the Monpa Mimang Tshokpa.

The JAC had last year organized a rally, protesting the alleged illegal construction on government land. While it had said that its rally was not against the church specifically, the rally came at a time when tensions were high already.

While the Natung-led committee was supposed to submit its report in six months since it was formed, the continued pandemic slowed things down, with the minister even admitting to it after the meeting.

The detailed discussions held during the closed-door meeting were not made public.

Speaking to the media after the marathon meeting, Natung said that the representatives of the different organizations have placed their views and grievances, and that the committee would continue to further assess the situation.

No resolution has been reached yet and the committee did not set a deadline, either.

“We saw the site where the church was being built and also met with the district administration. We have gathered all documents from the organizations that were submitted and will study them and find a solution,” he said.

Natung said that a resolution to the issue would be arrived at after studying the documents. He also did not give a timeline as to when the report will be submitted, but said that the committee would work to do it soon.