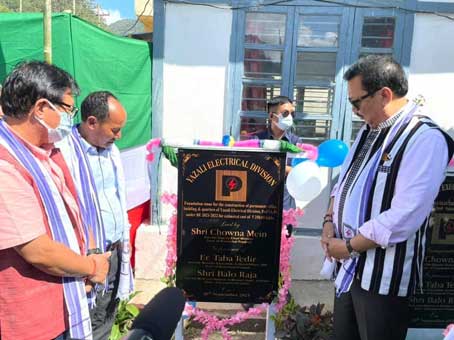 YAZALI, 30 Sep: Deputy Chief Minister (DCM) Chowna Mein informed that a comprehensive scheme for a transmission line in Arunachal Pradesh, worth about Rs 9,000 crore, “is being conceptualized and proposed to the government of India.”

Mein said that, in order to ensure uninterrupted power supply and do away with wastage of power, the transmission line has to be strengthened “and the central government is also emphasizing on it.”

He also informed that the government of India has exempted transport charges for electricity that will be drawn from Arunachal Pradesh.

He also laid the foundation stone for the construction of a bridge over the Panyor river at Yazali. The bridge will be constructed under the CRIF scheme at an estimated cost of Rs 16.58 crores. It will benefit the people of 12 villages living across the river. It will also bring connectivity to large areas of agriculture and horticulture farms located on the other side of the river.

Mein said that the hydropower, tourism, agriculture and horticulture sectors are the main revenue earning sources for Arunachal Pradesh. “Hence, the state is according priority to these sectors and giving top priority to connectivity, which will enhance development in these sectors,” he said.

The DCM urged the people to cooperate in the implementation of road and hydropower projects “as these are vital for all-round development of the state.”

He further said that “a revolution has been going on in the agriculture and horticulture sectors in the state” and informed that, under the credit-linked Atmanirbhar Krishi Yojana and Atmanirbhar Bhagwani Yojana recently launched by the chief minister, Rs 30 crores out of Rs 60 crores announced in the budget has been released to the agriculture department.

Mein urged the educated unemployed youths of the state to “avail the benefits and take up self-employment schemes under the tourism and agriculture sectors.”

He said that, since Yachuli is located near the ICR, the agriculture and horticulture produces from the area can be easily transported and supplied to the capital.

“Once the construction of highway is completed, there will be unlimited flow of tourists in this place as there is huge scope for nature, adventure, research and cultural and religious tourism in the state,” the DCM said, and emphasized the need to protect and conserve the environment for the sustenance of streams and rivers.

Responding to a memorandum submitted by the people of Yazali circle, he assured to sanction drawing of an 11 kv line from Yazali to Taib village, create hydropower subdivisions at Yachuli and Yazali, and electrify Tepin Happa village.

He said he would take up the other demands in the next budget and also address the matter of upgrading Yazali CO headquarters to EAC headquarters in the cabinet meeting.

The dignitaries also visited the integrated farm of progressive farmer Joram Anya. It was informed that she earns Rs 15-20 lakhs annually by selling organic produces from her farm.