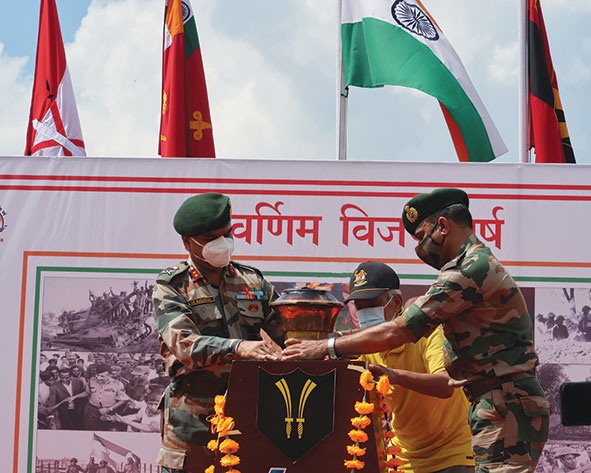 ROING, 2 Oct: The victory flame of the Swarnim Vijay Varsh – the golden jubilee celebration of the Indian Army’s victory over Pakistan in the 1971 war – arrived here in Lower Dibang Valley (LDV) district and was ceremonially installed at the Kera aa jubilee ground by the Indian Army on Saturday.

The victory flame arrived here via Dambuk, where the Indian Army paid homage at the war memorial of the Anglo-Abor war.

2 Mountain Division GOC, Maj Gen Dheerendra Singh Kushwah said, “Each year, the Indian Army, Navy and Air Force celebrate the 16th of December as Vijay Diwas, which is called so because on this day in 1971, a young India made itself recognized by the world after a historic victory over Pakistan.”

He said that the prime minister started off the journey of the victory flame on 16 December, 2020 from the national war memorial in Delhi to all other parts of India.

“The objective is that the flame must reach every corner of the country to commemorate war veterans and ex-servicemen, and every common Indian to be informed and remember the 1971 war,” Maj Gen Kushwah said.

1971 war veterans were felicitated at the celebration and honoured for their contribution towards the nation.

LDV DC KN Damo said that “such ventures will create a better understanding between the army and the civilians, and will also encourage youngsters to join the army.”

Powerful performances by Gatka dancers and Khukuri dancers of the Indian Army left the spectators mesmerized. Army music band ‘Euphonic Fusioners’ also performed, and there was a military band display by the 3/4 GR Chindits.

Students of the GHSS, the VKV, the JNV and the KV also displayed colourful patriotic performances.