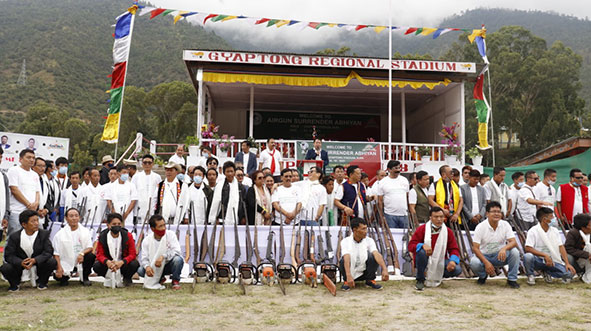 RUPA, 3 Oct: More than 150 air rifles, double and single barrel guns and power chainsaws were surrendered by the owners during an ‘airgun surrender abhiyan’ organized at Gyaptong stadium here in West Kameng district on Sunday.

As many as 151 air rifles, .12 DBBL and .12 SBBL guns and seven power chainsaws were surrendered to the environment & forests department in the presence of Environment & Forest Minister Mama Natung, several MLAs and top forest officials.

On the occasion, Jungpam village was declared as the ‘first air gun-free’ village in the state.

Natung felicitated all those who surrendered their

guns and power chainsaws. He also felicitated the CBOs, NGOs and various other organizations that are working for protection and conservation of wildlife and forests.

Highlighting the objective of the airgun surrender abhiyan, the minister called upon the community members to participate in protection and conservation efforts.

Natung accepted the proposal by Dirang MLA Phurpa Tsering for preservation and display of the surrendered guns in museums and Buddhist gonpas.

The minister lauded the Singchung Bugun Village Community Reserve and the Biodiversity Management Committee, Shergaon for their continued efforts in ensuring conservation of wildlife and biodiversity.

MLA Kumsi Sidisow assured to take forward the airgun surrender abhiyan to every district. He said that “the abhiyan is receiving positive response from the entire state.”

It was organized for the Shergaon, Bomdila and Khellong forest divisions of West Kameng district. (DIPRO)