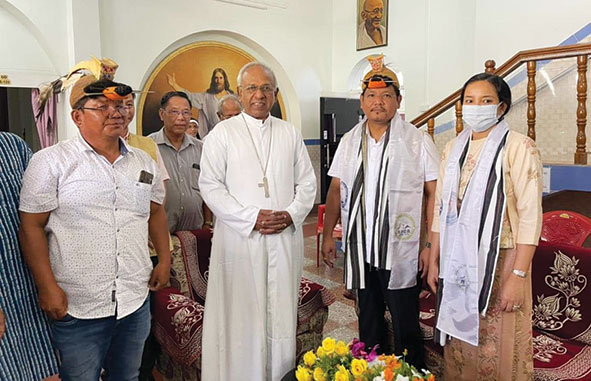 Sangma on Monday called on Itanagar bishop John Thomas Kattrukudiyil at the latter’s residence in Papu Nallah and gave assurance that he would provide all possible assistance to the churches in continuing their efforts to contribute towards the development of the society.

Speaking to reporters, Sangma said that “the Church has immensely participated in bringing up a better society, especially in Arunachal Pradesh.” He said there are more than 40,000 students studying in different educational institutions run by Catholic missionaries.

“My father had also visited the place earlier. At the same time, I also look to help the Church in improving the service they have been providing to the people and society at large,” he said, adding that the visit was purely personal.

On the upcoming conclave, Sangma said, “It is very important as the entire regional issues will be discussed on the day. While we maintain regional aspirations, can we also ensure that the national interests and outlook are being maintained? How do we balance the regional aspects with national aspects? That is what the conclave aims to deliver.”

He appealed to the youths and the public of the state to participate in the conclave. “Apart from this, we will be also holding a series of conclaves in different parts of the Northeast,” he added.

“The issues are not political but regional and in the interest of the indigenous people,” he said.

Sangma also said that the Northeast region should not only be just a part of the country “but supersede the other parts of the country to be the best economic zone.”

Stating that plenty of economic and developmental activities have been seen in the NE region, Sangma said that the aspiration of the NPP “is to ensure that the development activities are carried forward in the Northeast and the country as a whole.”

Earlier, Sangma visited the state museum here along with his spouse.