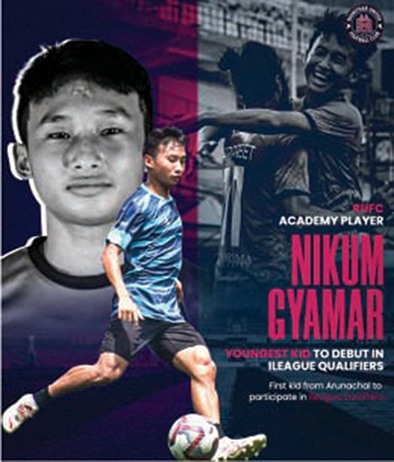 He played his first match in the final round against Madan Maharaj FC. The final match of the qualifiers will be played between Kenkre and RUFC on 23 October.

Son of Labour Officer Gyamar Tajik, Nikum is one of the youngest players in the history of the Hero I-League qualifiers. He caught the attention of coach Vikrant Sharma during

the pre-season in Bhilwara, Rajasthan, and since then there has been no looking back for him.

He was scouted by RUFC, which offered him a scholarship seat at its residential football school based in Bhilwara, Rajasthan, following his outstanding performance in the BC Roy Trophy Championship.

“It is a new beginning for my football career and I want to make the best out of this opportunity by contributing not only on the field but also off it,” said Nikum, who has earlier represented Arunachal in the BC Roy Trophy Championship and in the U-15 Sub-Junior National Championship.