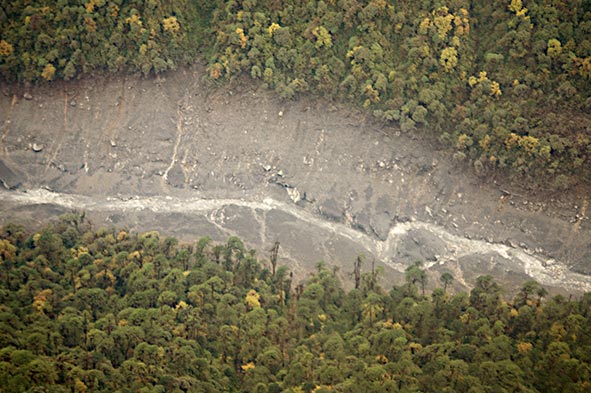 The Kameng river has three large tributaries that originate in heavily glaciated valleys – the Wai Bung, the Pachuk and the Wapra Bung (earlier referred to as the Warriyang Bung, and corrected after checking with the gaon burah of Sario village). All these tributaries are within East Kameng district. These valleys are composed of permanent ice (glaciers), rock, snow and steep mountain slopes that rise up to an altitude of 6,000 m+ ridge separating Arunachal Pradesh and Tibet. The ridge rises along with the grand mountain peaks of East Kameng district such as the Kangto, Kyarisatam and Kra Daadi. Given that the earth 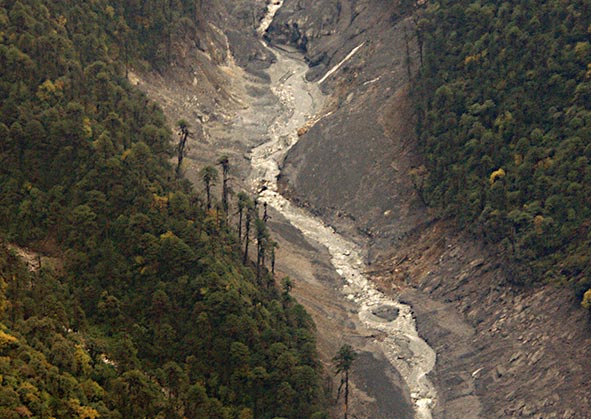 has been warming since 11,700 years ago and is now warming at an accelerated rate due to historical and ongoing emissions, these glaciers are receding and reducing in size. Such recession creates a complex, dynamic and ever-changing environment. Coupled with the ongoing uplift of the Himalayas, there are additional geomorphic stresses that act on these glaciated environments. These geomorphic stresses are eased by earthquakes that occur unexpectedly.

On 13 October, 2021, the earth sciences ministry’s National Centre for Seismology detected a shallow earthquake of 3.4 magnitude near a ridge separating the Kameng river and the Wapra Bung river. Subsequently, on the 30th, another earthquake of magnitude 3.4 occurred 46 kms southwest of this area. Satellite images of this area before and after 13 October did not reveal any detectable change in the geomorphology here. No landslides were observed. However, by the 29th, the river was already heavy with sediments.

However, on 28 October, a landslide scar was observed in the Wapra Bung river valley, and on the 29th people started observing dead fish, an exceptionally muddy Kameng river and logs deposited by the river’s banks. Satellite images show that the Wapra Bung had significantly widened due to a debris flow. Subsequently satellite images also reveal a large landslide had occurred on the mountain slope above one glacier of the Wapra Bung. The landslide destabilized a part of a glacier, perhaps blocked the flow of glacier channels, and then failed, resulting in the debris flow and siltation of the Kameng river.

While it is unusual for the effects of an earthquake to take effect after so long, there may have been tremors that were undetected due to their low magnitude. Additionally, this region may be composed of layers of rock that are susceptible to failure if destabilized.

The mountain slope above Wapra Bung glacier is exceptionally steep, rising from 3,500 m to 6,900 m in just 8 kms. Satellite images show complete loss of snow and ice on this slope, perhaps due to a combination of factors such as the earthquakes, melting of ice and snow, rainfall and steep slopes. The exact causes are currently being investigated by a team of scientists.

The aerial survey conducted on 5 November revealed significant erosion of the Wapra Bung valley up to 30 kms downstream from the glacier. Preliminary observations suggest that this was a debris flow event (silt and sediment slurry) and not a debris flood event (water with ‘normal’ sediment concentration), based on the damage to vegetation, mud deposits, and the absence of any glacial lake in the past. A ground survey will allow us to confirm the same. Between 31 October and 4 November a second debris flow event occurred along the valley, expanding the width of the erosion scar five-fold. Thereafter, satellite images show no accumulation of snow on this mountain slope for unknown reasons. An unstable slope seems to be the explanation.

The aquatic ecosystem is under stress as there is exceptional sediment that is reducing dissolved oxygen levels. An analysis by Dr Punyasloke Bhadury of IISER Kolkata has revealed very little photosynthetic activity in the river due to the turbidity. Thus, there is very little food for the fish, and those that survived the debris flow event have escaped into other tributaries that were clear. The protection of fish in these neighbouring tributaries is very important through this ecological disaster, to allow them to bounce back and take care of the Kameng river. This is likely to happen only next year or later, and the citizens of East Kameng must play their part.

Such debris flow events occur through most regions on Earth and are unpredictable. As far as risk to downstream settlements – the weather has cooled but the mountain slope is still giving off plumes of dust, indicating that it is trying to stabilize. No lake formation has happened in this valley as per radar satellite data on 7 November. We scientists and researchers are monitoring this event closely from multiple angles (ecological, meteorological and geomorphological) along with East Kameng district’s deputy commissioner to inform any public advisory and understand if such events can be predicted in the future. (Chintan Sheth is an independent researcher and geographer.)