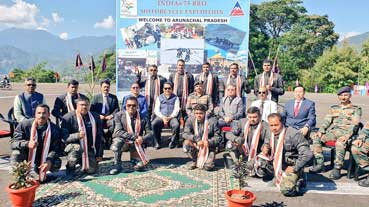 ITANAGAR, 11 Nov: On the third leg of its expedition, the ‘[email protected] BRO Motorcycle Expedition’ team reached Arunachal Pradesh to a rousing welcome on Thursday.

The Border Roads Organization (BRO) is conducting the expedition from 14 October to 27 December, touching all corners of the country to spread awareness about the contribution of the BRO in nation-building, as part of the Azadi Ka Amrit Mahotsav.

Welcoming the expedition team at the Raj Bhavan here, Deputy Chief Minister Chowna Mein highlighted “the yeoman service being rendered by the BRO in connecting places and connecting people in the country in general and Arunachal Pradesh in particular.”

Mein also flagged off the next leg of the expedition towards Pasighat.

Defence Minister Rajnath Singh had flagged off the expedition from Delhi on 14 October. A first of its kind, the expedition, being undertaken by 75 riders from the BRO, will cover 20,000 kms over 75 days before culminating in New Delhi on 27 December.