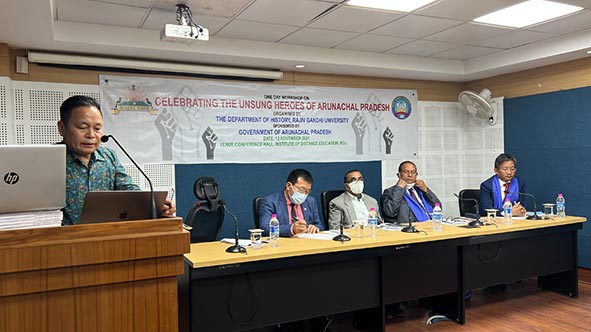 Addressing the workshop, RGU Pro-Vice Chancellor Prof Amitava Mitra said that the university has successfully completed such projects in a time-bound manner, and that the project on the unsung heroes would also be completed on time.

History HoD Prof Ashan Riddi said that the workshop was sponsored by the state government “to research and identify the unsung heroes from Arunachal Pradesh on the occasion of the Azadi Ka Amrit Mahotsav.” He also laid out the research strategies and modalities.

GoAP Secretary Dani Salu stated that the idea was first deliberated in the last session of the legislative assembly, “according to which, a five-member core committee headed by the deputy chief minister was formed to conduct research on the contribution of various personalities of the state in the country’s freedom struggle.”

RGU’s history department has been entrusted with the task of conducting the research work, he said, and emphasized on the “importance of oral traditions and objectivity for the research work.”

Retired professor S Dutta spoke on the “need of data collection and proper research to identify the heroes of Arunachal Pradesh.”