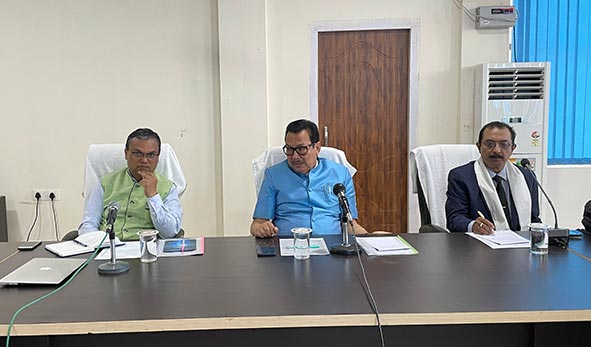 Chairing a meeting on ‘Policy framework for livelihood development, employment & income generation in Arunachal Pradesh through support to the plantation sector’ at the district secretariat here on Monday, Mein said that the state needs such a policy because it has the “highest land bank in the Himalayan region with favourable agro-climatic zone for growing various crops, including plantation crops like tea, arecanut, etc.”

Stating that many arecanut plantations are coming up in the eastern belt of the state, he asked the officers of the agriculture and allied departments to “suggest more plantation crops for taking up under the policy.”

Planning Commissioner PS Lokhande suggested taking up “new scheme in the manner of Atmanirbhar Krishi/Bhagwani in the coming budget, wherein plantation crops can be taken up.” He suggested “increasing the production to sizeable amount of our valued crops like kiwi, etc, in order to meet the demands of the fruits from outside the state.”

Lokhande said that “there are large demands of the Arunachal kiwi but we are not able to meet their demands.”

Retired Assam Agriculture University (Jorhat) chief scientist Dr AC Barbora presented a draft policy on tea and arecanut plantation, and informed that, “out of the total 83,74,300 ha of geographical area of the state, 67,25,000 ha is categorized under forest land and only 4,23,000 ha is categorized as cultivable land in the state, out of which only half of the area (2,12,000 ha) is reported as net sown area.”

He informed that an additional 4,66,581 ha area could be brought under cultivation, increasing the total cultivated area to 6,78,851 ha.

“The government only needs to provide financial, technical and administrative support in select activities for 1-5 ha area per farmer. The number of farmers and the size of the area per farmer in different districts would be decided by a ‘state level implementation committee’, if the draft policy is adopted,” Dr Barbora said.

Among others, the Namsai ADC, DPO, DFO, DAO, DHO and a senior scientist of the KVK attended the meeting. (DCM’s PR Cell)