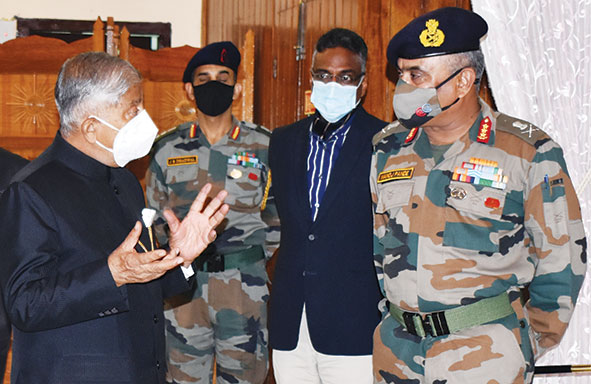 ITANAGAR, 21 Nov: Governor BD Mishra suggested to GOC-in-Chief of the Eastern Army Command, Lt Gen Manoj Pande to “adopt a cautious approach while dealing with the local populations in the insurgency-affected areas of Arunachal Pradesh.”

Mishra made the suggestion when the army commander called on him at the Raj Bhavan here on Sunday and discussed issues related to border defence and healthier civil-army liaison.

Sharing the observations he made during his recent visit to insurgency-affected districts of eastern Arunachal, the governor said that the army units, along with their prime responsibility of guarding the frontiers, should also adopt villages and schools and conduct medical camps in their areas of responsibility.

“Such initiatives by the army will help in arresting the migration of the indigenous population from border areas to urban settlements,” Mishra said.

The governor, who always bats for recruitment of home-grown soldiers to further strengthen the army, said that the recruitment of local youths in the army would have multifaceted advantages.

“Our youths with an inherent son-of-the-soil instinct to defend every inch of our land are tough, know the terrain of the border areas like the back of their palms, and are well adapted to the topography,” he said.

The governor complimented the GOC-in-C for maintaining the territorial integrity of the nation, particularly in Arunachal.

The army commander briefed the governor on the overall scenario of the army’s presence in the state. (Raj Bhavan)