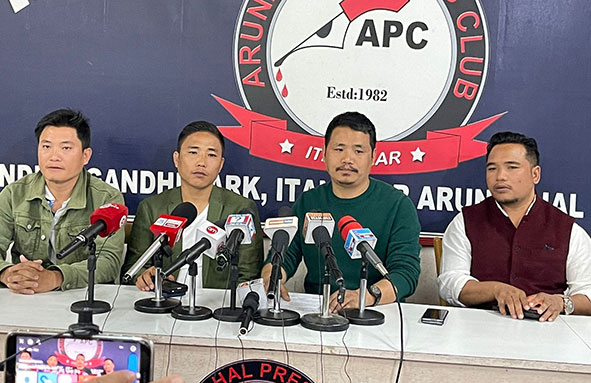 ITANAGAR, 26 Nov: The All Nyishi Students’ Union (ANSU) on Friday announced a 36-hour capital bandh on 6 December as the second phase of its agitation against the government for allegedly failing to fulfil its demand for transfer of Education Commissioner Niharika Rai and withdrawal of the FIR registered against ANSU’s members.

However, the ANSU left the door for negotiation open, stating that it is ready to sit in a roundtable discussion to resolve the impasse.

In a press conference at the Arunachal Press Club here, ANSU general secretary Gora Rikam informed: “We have resolved to go ahead with 36 hours capital bandh as second phase of our agitation, since the government is yet to fulfil our demands.”

However, Rikam said that the union would reconsider its decision if the government fulfils its demands.

He clarified that the FIR is not a primary concern for the ANSU but the union was hurt over the registering of the FIR against it despite the fact that the ANSU team verbally intimated the chief minister’s office regarding the minor altercation that had taken place with security personnel at the secretariat gate.

“FIR is not our primary concern, but the instruction came from top authority to register a case against us, despite verbal intimation to chief minister’s office hurts our sentiment,” said Dodum.

“We have no problem with the police. The officer and the security personnel were doing their duties. But we were hurt that the instruction came down from the top authority,” he added.

He also said that the ANSU has nothing personal against the state government or the home minister and the education minister.

The union claimed that the action taken report over its charter of demands, presented by Home Minister Bamang Felix on 22 November “was ambiguous and unsubstantiated.”

Earlier, the ANSU had submitted a 14-point charter of demands to the chief minister, which included immediate cancellation of tender for procurement and supply of school uniforms by the secondary education director; corpus fund for teachers’ welfare for every school of the state, including in Nyishi-inhabited areas, to carry out curriculum activities; immediate recruitment of TGTs and PGTs against sanctioned vacant posts; revocation of the DBT system or creation of a better than DBT system as the system is not working properly across the state; introduction of uniformity of school fees for various private schools; closure of all zero enrolment schools; proper utilization of infrastructure for better purpose; and regularization of 400 contractual teachers working under the SSA (ISSE).

Sources informed The Arunachal Times that the state government is scrambling to resolve the deadlock as there is growing apprehension that the bandh proposed by the ANSU may be hijacked by groups with vested interests to create law and order problems in the state capital.