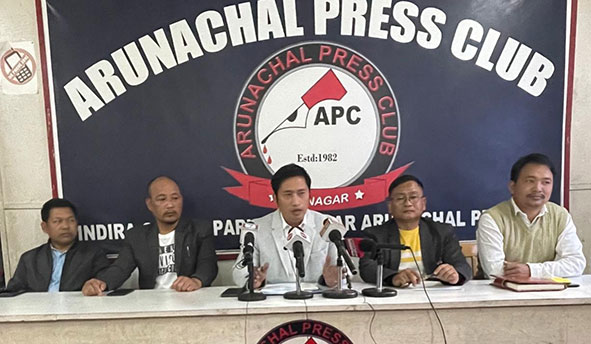 ITANAGAR, 30 Nov: The state unit of the National People’s Party (NPP) on Tuesday expressed grave concern over the boundary skirmishes that occurred between Assam and Arunachal Pradesh at Lora, Belo and Boka villages in Kimin circle of Papum Pare district on 23 November.

It was reported that Assam’s forest officials resorted to blank firing along the boundary on the Arunachal side.

“This situation is of grave concern. Repeated violations of the status quo by Assam officials are highly condemnable,” state NPP general secretary Paknga Bage said in a press conference.

Bage informed that an NPP team led by him visited the affected villages “to assess the ground report” and interacted with the villagers on Monday. He said that Assam’s forest officials had served an eviction notice to the villagers settled along the Assam-Arunachal boundary on 16 November.

“It seems there is a nexus between the tea grower community and the Assam forest officials,” he added, and urged the state government to settle the boundary issue at the earliest.

Bage also said that the state government should expedite its initiative to settle the boundary dispute outside the court, as proposed by Chief Minister Pema Khandu.

The NPP leader demanded “posting of a full-fledged functioning director of border affairs with sufficient staff and logistic support,” and asked the government to ensure that police outposts in the disputed boundary areas are made functional.

The party urged the government to “introduce a border task force to check illegal encroachment, drug and human trafficking or other criminal activities in the boundary areas and develop roads connecting Kimin with Doimukh via Boka village, and Kimin to Dollungmukh.”

The party also asked the government to “assess the ground report of boundary skirmishes.”