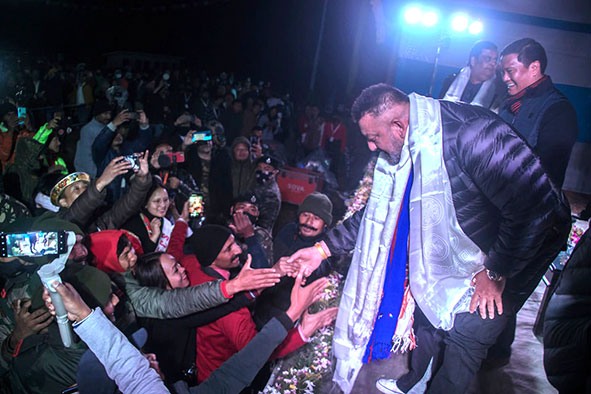 MECHUKHA, 30 Nov: Roped in as the brand ambassador of the ’50 years of Arunachal Pradesh’ celebration, Bollywood actor Sanjay Dutt kicked off the media campaign for the month-long celebration – to be held from 20 January to 20 February, 2022 – in the presence of Chief Minister Pema Khandu and Legislative Assembly Speaker PD Sona here in Shi-Yomi district on Monday.

Earlier known as the North-East Frontier Agency (NEFA), Arunachal Pradesh came into existence as a union territory on 20 January, 1972.

The celebration is scheduled to start at Ziro in Lower Subansiri district. It will cover all the five river basins of the state after which the first five districts were named, viz, Kameng, Subansiri, Siang, Lohit and Tirap.

The month-long event will culminate on 20 February, 2022

at Itanagar during the 36th Statehood Day celebration.

Lauding the beauty of Arunachal, Dutt said that the state’s culture, its food and the people are unique, and assured to give his best in highlighting this uniqueness to the people outside.

As part of the media campaign, Dutt will feature in a series of promotional videos on tourism in the state.

Dutt will also engage with local youths in a series of initiatives on substance abuse and issues that have emerged as serious concern for the state in recent years.

Recalling his days of substance abuse, the actor said, “It is better to live life, and life is a better high than any drug in the world.”

Dutt also expressed gratitude to the security forces guarding the country against external forces in harsh conditions along the borders. (CM’s PR Cell)