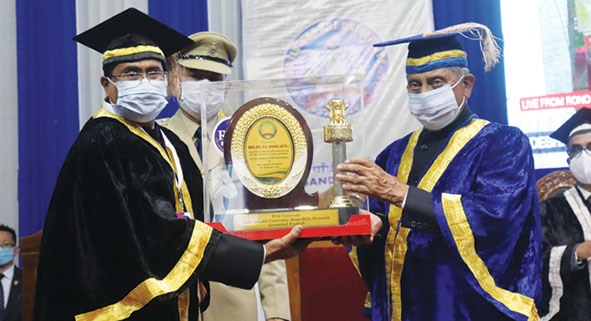 Thirty-three PhDs and six MPhils were awarded during the convocation, and various gold medallists in postgraduate and undergraduate courses were also awarded.

Governor and Chief Rector of RGU, BD Mishra presided over the programme.

Prof Rajput called upon the young graduates to explore avenues and opportunities to enhance their innovative and entrepreneurial skills.

Education Minister Taba Tedir termed the occasion “a memorable one for the young graduating students, as it will remain with them in the years ahead.”

“It is an undeniable truth that success does not happen by chance, nor does it occur overnight. The winner of any award proved that they are a cut above the rest in the focused pursuits of their goals,” the minister said.

“In spite of being situated in the remote northeastern corner of the country, RGU has properly maintained its academic excellence, as a result of which, it earned a position for itself among the top 100 educational institutions in the country in 2019. In 2020, the university secured the second position by the government of India in the ranking of central universities of the country with a score of 83 percent. Even during the difficult period of Covid-19 pandemic, the university had completed all the academic activities successfully, holding online classes and organizing many national and international conferences by observing proper SOPs,” he said.

Regarding the development of the university, he said that 10 new departments, including the department of physical education, have been made operational from this season. “The faculty of sports sciences has been established under the aegis of the ministry of sports with five departments and 25 posts,” he said.

Speaking about learning infrastructure, he said that several of the university’s classrooms have been converted into smart classrooms with state-of-the-art technology. “The university also has smart theatres that are capable of hosting different webinars, virtual talks and lectures series,” he said.

Encouraging the faculty members, Prof Kushwaha added that a grant of 75 percent of patent fee will be provided to those who come up with innovative ideas and wish to file for patents. The university also has a provision for providing seed money of Rs 2 lakhs to newly appointed faculty members for starting new projects, he said, adding that many MoUs with reputed agencies have been signed and projects are underway.

Governor BD Mishra presented the Chancellor’s Gold Medal for the 2020-21 academic session to Basit Rahman, and gold medals to the toppers in various disciplines in the undergraduate degree course during the convocation.

Congratulating the awardees, the governor said, “The most important factor for human beings for attaining a benchmark in life is awareness and being abreast with contemporary happenings. Equally important in life is communication skill. In one’s entire life, one’s success or otherwise will depend on interpersonal behaviour, and if a person wants to have an identity for him or her, he or she has to be an informed, good communicator.”

The governor advised the students not to run after government jobs only, and suggested to them to become startup entrepreneurs and job providers by availing various government schemes.

He asked the students to “inculcate the seven chapters of behaviour, that is, transparency, accountability, probity, promptness, equal dispensation, audit, and midcourse correction.” (With input from Raj Bhavan)