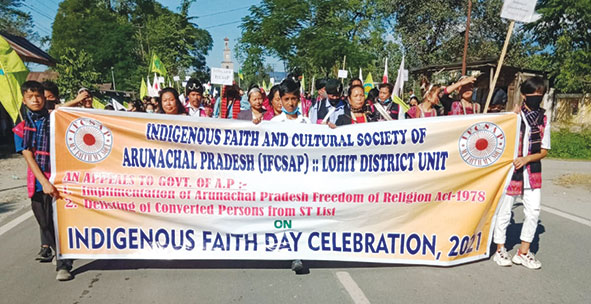 ITANAGAR, 1 Dec:  Indigenous Faith Day (IFD) was celebrated across the state with various events with a resolve to safeguard the indigenous faith and identity on Wednesday.

“No one will protect our culture and it’s our responsibility to protect it,” he added.

In Lohit district, members from different communities of Tezu township, led by VKV Tafragam band team took out a procession at Tezu  to mark the IFD celebration.

Addressing a gathering at the Jubilee Ground here, Lohit DC Marge Sora urged the people to respect each other’s religion and to coexist in harmony. He also asked all to not give up on one’s culture and way of living ‘though changes with time are imminent.’

Prayer meetings and various cultural programmes were also organized to mark the day.

At Daporijo in Upper Subansiri district, Transport Minister Nakap Nalo urged everyone to have knowledge of their own identity, culture and tradition.

He also discouraged the superstitious belief in curing disease, and instead encouraged preservation of own dialects and languages.

MLA Taniya Soki urged the believers to protect the indigenous  faith and culture inherited from the ancestors.

Attending the IFD celebration at Raga in Kamle district, MLA Tarin Dakpe stressed on the need for preservation of customs and traditions passed down by our ancestors.

“These traditions, customs and rituals are our real identity,” he said.

Expressing his gratitude to the priests (Nyibu’s) for their untiring efforts to serve the people, he called upon them to maintain the sanctity and purity of the institution of priesthood and serve the community with dedication.

Nyishi Nyidung Mwngjwng Rallung (NNMR) president Pai Dave called upon the youths and the intellectuals to shoulder the responsibilities of preserving our tradition and culture for the next generations to come.

“The namlos should not be a mere place for worship only but should also serve as centres of preservation and platforms to disseminate the knowledge of our traditions and culture,” Dave said.

The Anjaw unit of the IFCSAP celebrated the Indigenous Faith Day at Hawai with great enthusiasm.

The celebration began with a procession to raise awareness on the importance of preservation of culture and identity of indigenous faith,  followed by cultural events.

All the speakers on the occasion insisted on protecting and preserving the indigenous faith of the Mishmi community in particular and all other communities of the state as a whole.

Principal of the school, MV Ravindran highlighted the glorious traditions and cultural heritage of Arunachal.

Public leader and a member of the school supporting group Kitpong Kitnal expressed his satisfaction on the overall progress of the school. He said that the contribution of VKVs in the field of education is exemplary.(DIPROs)