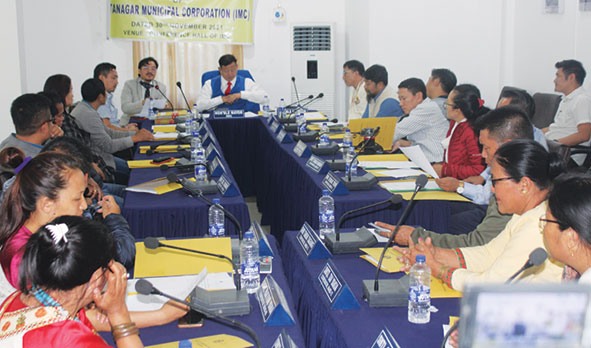 ITANAGAR, 1 Dec:   Mayor of the  Itanagar Municipal Corporation (IMC), Tame Phassang on Wednesday urged the Urban Development department to hand over the various infrastructure constructed by the department to the IMC for proper regularization and utilization.

Citing the example of parking lots, BPL houses, burial ground, urban forestry and other infrastructures, the mayor said “the UD department is the construction agency for the various assets, but the IMC is the regularization authority. The department should hand over the completed projects  to the IMC so that it  could regularize them  and generate revenue for the state.”

Speaking to reporters here, Phassang informed  that the IMC took various decisions for the development under its jurisdiction and the state during its business meeting conducted on 30 November last.

He informed that 40 new vehicles to collect garbage will be arriving within a week, and work for two solid waste management (SWM) plants  — at Karsingsa and Itanagar  — have also started.

“The approach road for the SWM plants is almost completed and the work for the sewerage system under IMC jurisdiction that was lying defunct has been resumed,” added the mayor.

He also informed that, under the Azadi ka Amrit Mahotsav, the IMC has taken various initiatives and also resolved to establish its permanent office within one year.

“Due to the absence of a permanent office of IMC, denizens have to suffer various problems for their official works, so members have resolved to establish its office as soon as possible,” he said.