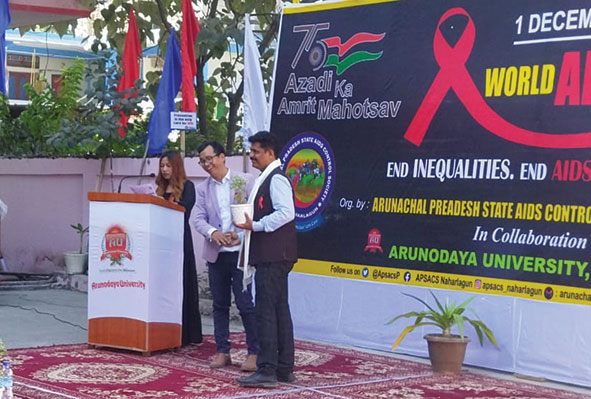 In the state capital, an awareness ride was organized from Itanagar to Lekhi by bullet riders composed of the Royal Arunachal Riders, Arunachal Bullet Club, Gliding Piranhas, Gurkha Riders, Decant Souls and Tani Riders to mark the day.

Earlier, MLA and adviser to the education minister, Kento Rina flagged off the awareness ride from Akashdeep Complex here. He asked everyone to contribute in creating awareness about HIV and AIDS as it can affect any one.

“As there is no definite cure and no vaccine against HIV, awareness is the only way to prevent it,” he added.

During a programme organized by the APSACS at Arunodaya University  in Lekhi, Naharlagun, Director of Health Services Dr M Lego stressed on the importance of good mental health to have a healthy body. “HIV/AIDS can be prevented and controlled only if we have proper knowledge,” he added.

APSACS Project Director Dr Riken Rina who said, “The epidemic of HIV has been in existence for the last many years but till today there is no cure for HIV and the human race is yet to develop a vaccine against HIV. The only answer against HIV is your knowledge and awareness.”

While highlighting the menace of drug abuse and the correlation between drug usage and HIV, he informed that “Arunachal Pradesh stands first in heroin drug abuse, third in alcohol consumption, inhalants and ganja abuse among entire states and union territories in India.”

Aalo: A 24 km-long walkathon was organized by the Mothers’ Vision, a local NGO from Aalo to Kamba to mark the World AIDS Day here in West Siang district.

A team of former addicts participated in the walkathon by creating awareness amongst people on issues like drugs and alcohol abuse, HIV/AIDS and safe driving.

The 2nd AAP Bn. Commandant, Tumme Amo, along with his team of officers, besides DSP and Aalo police station OC Yomken Riram  also participated in the events to motivate participants.

ITANAGAR: The NSS unit of Dera Natung Government College here also observed World Aids Day. Principal Dr MQ Khan encouraged the students to get involved in raising awareness among the people about the HID/AIDS, its modes of transmission and preventive measures.

An awareness programme on HIV-AIDS and counseling was held for the migrant population with the support of Arunachal Pradesh States Aids Control Society under the Targeted Intervention (TI) project on migrants, the Society’s chairman Tenia Tering said in a release.

Free HIV/AIDS testing were also conducted and IEC materials, like posters, pamphlets etc and condoms distributed to the participants.