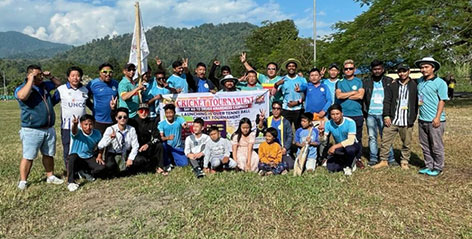 ITANAGAR, 31 Dec: The cricket team of Naharlagun United FC won the first Winter Cricket Tournament 2021, defeating Magnificent XI by 9 wickets in the final played on Friday at the NEEPCO ground in Doimukh.

Batting first, Magnificent XI could make 100 runs in 15 overs, which was easily chased by the NUFC cricket team, losing only one wicket.

Later, Tasuk was adjudged man of the match.

Kara Bazoom of NUFC was adjudged man of the series for his outstanding performances throughout the tournament.

“Naharlagun United FC was formed back in 2001 as a football club and has produced many a state and national level footballers. The club is also three-time state level veteran football tournament. To encourage and promote cricket, we have also formed a cricket team and participated in the championship,” NUFC captain John Neelam said.

The tournament was organized to create awareness on the ill effects of drug abuse and to fight against the menace.