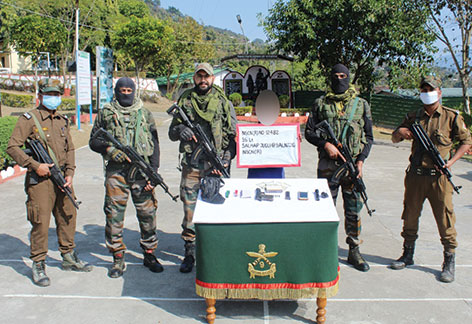 CHANGLANG, 5 Jan: One NSCN (R) operative was arrested on Tuesday last by a joint team of 9th Assam rifles and the police in the general area of Jongsum village under Kantang circle here.

Based on specific input, the joint team of 9th Assam rifles and police launched a joint operation and during their search apprehended one active cadre of NSCN (R) identified as SS lieutenant Salhap Jugli alias Salnang (46), a resident of Jongsum village under Kantang circle from the spot.

A made in Italy pistol with 6 rounds of live ammunition and incriminating documents were recovered from his possession. The cadre was actively involved in forceful extortion in Changlang district for NSCN (R) outfit.

Changlang SP Mihin Gambo has in a release on Wednesday informed that the operation was a part of ongoing crackdown on insurgent groups operating in Changlang district by security forces and police to maintain peace and tranquility in the district.

Meanwhile, another active cadre of NSCN (R), identified as SS private Bansam Hangphuk (33), a resident of Watlom village, Yatdam circle here surrendered before the police, Assam Rifles and CRPF at the Changlang police station on Wednesday.