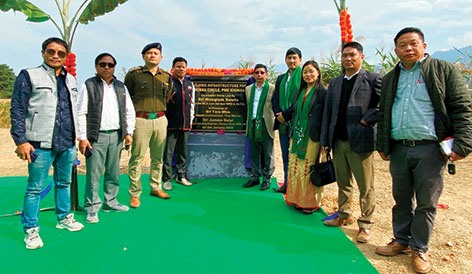 Sawin informed that the building infrastructure project, along with the PWD road from SP Bungalow to Bank Colony was initiated by him and MLA Wanglin Lowangdong since 2014, and lauded former PWD Minister Gojen Gadi for the prompt approval of the projects.

Sawin said that he would approach all the elected representatives of Tirap and Longding districts for fund contribution towards the construction of complete infrastructure of the Khonsa circle PWD. He also requested the district administration to check on land encroachment.

He also lauded the Pema Khandu-led government for providing fund for construction of infrastructure for staffers of the Khonsa circle PWD SE.

Tirap Deputy Commissioner Taro Mize said that “the creation of the PWD at Khonsa and its infrastructure bifurcating from Jairampur is a landmark achievement for the twin districts of Tirap and Longding.”

He also directed the construction agency and contractor to ensure proper implementation of the project as per approved DPR.

The DC urged all the government departments to submit complaint in written in case any government land is encroached upon by individuals in the district.

He further said that more funds will be required for construction of the Khonsa PWD SE office building.

Earlier, PWD EE Wangpong Rongrang informed that the name of the work is Building Infrastructure Development Plan – 2019-24, and the project cost is Rs 400 lakhs. The tender has been awarded to M/s TK Enterrpise, Khonsa after codal formalities.