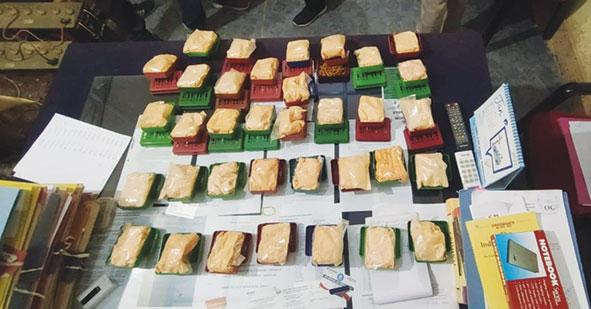 ITANAGAR, 12 Jan: In the biggest ever single operation in the history of the Arunachal Pradesh Police (APP), the Special Investigation Team (SIT) apprehended two drug peddlers and seized 471.56 grams (commercial quantity) of contraband psychotropic substance (heroin) from their possession.

The market value of the seized contraband is pegged at around Rs 1.25 crores, the police informed.

The SIT, led by its SP Rohit Rajbir Singh and OC, Inspector Ngilyang Lali, received secret intelligence about the movement of a massive amount of the banned contraband, heroin, from Dimapur (Nagaland), via Assam, to Arunachal Pradesh using public transportation.

The suspects were zeroed down and identified as Mariyam Basumatary (30 yrs) from Hatipatiashantipara village in Sonitpur district, Assam, and Choti Rapung (18 Yrs) of Seppa, East Kameng, Arunachal Pradesh.

After developing this information for over a month, finally, on 12 January, the SIT strike team, consisting of Inspector Ashok Tayeng, SI Chuman Chena, constables Dawa Dorjee, Nyamar Riba, Tagiam Giba, (D) J Sikom, L/C Sahin Ansari and L/C Sonam Chiriju conducted an operation to apprehend these two drug peddlers as they were coming through a night super bus of the Blue Hill service running from Dimapur (Nagaland) to Naharlagun.

Both the accused persons were traced and intercepted via a trap laid down in Nirjuli.

“The Dimapur source has also been identified and necessary penal action shall be taken against them too,” the police said, adding: “Raids are being conducted at various locations in continuation to this operation. A case under relevant sections is being registered, and further interrogation is being carried out.”

Also the APP PRO, Singh informed that “the arrest and seizure is a vital blow to the inter-state Dimapur-Tezpur-Nirjuli pathway of contraband influx. The APP SIT has been on the lookout to bust the inter-state narcotics mafia, being operated by individuals based in Assam, with narcotics sourcing from the heart of Nagaland. They play a pivotal role in introducing contraband into Arunachal Pradesh, and flooding its streets with banned substances.”