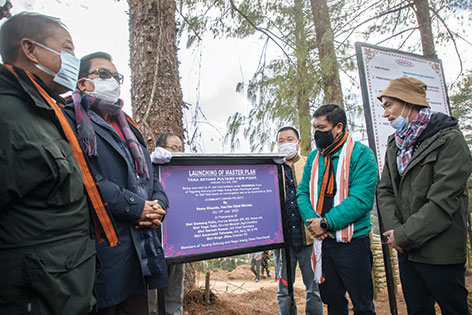 The view point, once completed, is expected to add attraction to the picturesque valley. The view point site is being developed entirely on a self help basis through a convergence model and executed by 81 job card

“This is a very unique initiative by community members. At the government level I have been always harping on convergence of central and state government schemes for completing one welfare or developmental project and here you are actually implementing it,” Khandu said.

He expressed hope that after completion, the project would become a successful model for others to emulate through the convergence model of execution.

Stating that the project would set an example for the future, Khandu asked the Pachayati Raj and Rural Development departments to document the entire process of the implementation and execution for records.

He said, “It is very important to record each and every detail, like how much money was invested, from which scheme and through which department, etc, so that the success story could be repeated elsewhere.”

“The success story could also become a source of research and education,” Khandu added.

Congratulating the 81 MGNREGA job card holders of Habung Gram Panchayat, who were present on the occasion, Khandu said that the performance of Arunachal Pradesh in availing man-days under the scheme has been very poor.

The central government assures 100 man-days (days of employment) per year at the rate of Rs 212 per day to rural villagers under MGNREGA. However, Khandu revealed that Lohit district, which tops in the list of providing man-days, has recorded only 71 man-days, while Lower Subansiri, of which Ziro is a part, recorded only 40 man-days.

“Maybe, as a tribal society we do not favour manual jobs much. But I believe, now that 81 villagers are availing this scheme to develop a revenue-generating project for themselves and their community will change the scenario,” Khandu expressed.

“MGNREGA is a performance-based scheme and therefore, if the state’s performance is good, the central government is ready to increase the man-days to more than 100,” he informed.

Resisting the urge to sanction funds for completion of the project, Khandu said, “I would have gladly sanctioned funds for the project from the government’s side but I won’t. I don’t want to dilute the entire purpose of the project. You finish the project just as you have planned and once it is completed, I assure the government will chip in for its further development.”

Khandu also expressed surprise when informed that at least 50 percent of physical work has been completed so far with the expenditure of only Rs 5 lakhs.

“This happens when community members work on a self-help basis with a mission. I can assure, had it been a government department executing the project, expenditure so far could have been in crores,” he observed.

The community driven project will consist of a cafeteria, to be designed in traditional architectural form, and managed by the Habung Welfare Society as a revenue generating unit.

Earlier in the day, Khandu visited the Vivekananda Kendra Vidyalaya (VKV) Ziro and inaugurated the Vigyan Nilayam consisting of a library block, one Atal Tinkering Lab and a composite science laboratory, which is a flagship initiative of VKV Ziro.