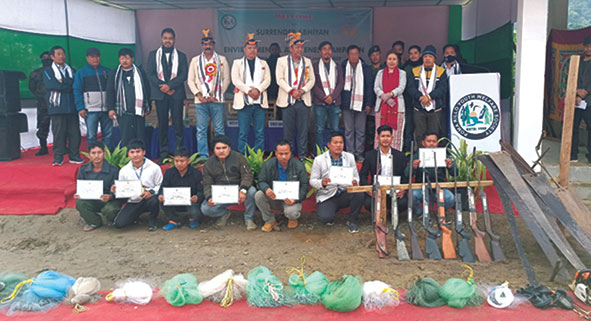 POMA, 23 Jan: Environment & Forest Minister Mama Natung on Saturday informed that 1,600 people in the state have surrendered their airguns and other guns till date.

Addressing an ‘Environment awareness campaign-cum-Airgun Surrender Abhiyan’ with panchayat members, youth leaders, members of NGOs, and others here in Sangdupota circle of Papum Pare district, Natung said that the Airgun Surrender Abhiyan is gaining momentum due to the support of the public, and appealed to the people of the state to be partners in conserving the state’s rich flora and fauna.

During the programme, seven airguns, one SBBL gun, chainsaws, fishing nets, fishing arrows, etc, were surrendered by the residents of the area.

The minister asked the elders, youths and GBs of Sangdupota to impose strict rules and regulations for the protection of the rivers, fountains, mountains and natural resources, and to take strict action against people who violate the rules.

He lauded Lt Col TC Tayum of the Indian Army and the youths of Rillo-Poma panchayat for taking a lead in protecting the flora and fauna.

PCCF RK Singh and senior officials of the forest department were also present on the occasion.

Rules and regulations under the jurisdiction of Poma panchayat were unveiled. The dignitaries also took part in a signature campaign for the protection of the flora and fauna of the state.

Later, they took part in a plantation programme.