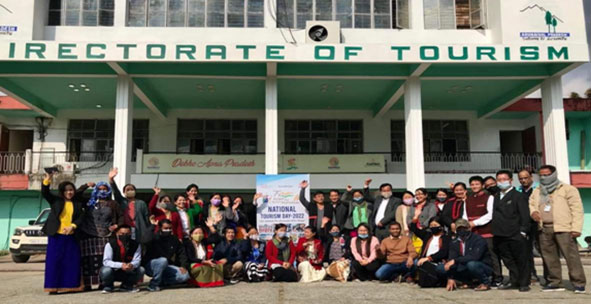 This year’s theme for the day was ‘Rural and community-centric tourism (RCCT)’. Gori village near Basar in Leparada district has been identified as a model for RCCT, the department stated in a release.

It said that it will develop five such villages in every ‘tourism district’ in the state in a span of five years for RCCT.

Highlighting the impact of Covid-19 on the tourism sector, the department said: “Rural and community-centric tourism has become more important these days, especially because we have put our attention mostly on rural tourism and homestays for the past six years.”

The department said it has put more than 25 rural tourism destinations in the state on the state’s tourism map, which it said has helped empower the local communities, especially women.

“They have now become protectors of their culture and their local biodiversity,” stated the release.

The department screened an audiovisual show of the national webinar organized by the tourism ministry. It was followed by a discussion on the importance of the day and its theme at the state tourism directorate office here.

Besides the department’s officials, members of the Arunachal Pradesh Tour Operators Association attended the programme.

DIPRO adds: In Tawang, addressing a gathering, local MLA Tsering Tashi said that the National Tourism Day is celebrated to create awareness about the tourism potential of the tourist destinations of the country.

“Tourism is not limited to taxis and hotel businesses only. It is one of the major growing industries, which can play a major role in economic development of the society by providing job opportunities to many,” the MLA said.

Tawang DC KN Damo stressed on the role of cleanliness and trained human resource for the development of the tourism industry. He said that “clean mountains, clean Tawang and plastic-free Tawang will be given priority,” and appealed to the stakeholders to cooperate in the mission.

In the afternoon, the DC attended a ‘local cuisine competition’ for the homestay owners of Shyo village, organized by the tourism department in collaboration with Himalayan Holidays.