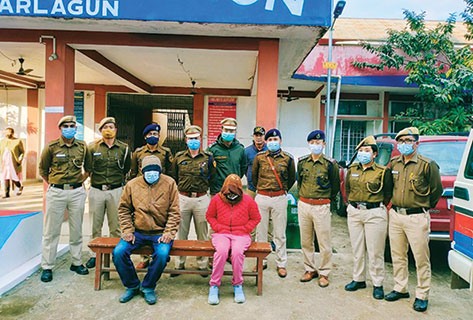 The two have been identified as Sangeeta Bansal and Jogen Saikia. Bansal is also a UDC in the Directorate of Health Services.

The third accomplice, identified as Taw Peri, is absconding.

The three allegedly promised candidates jobs in lieu of money.

On 20 January, the Naharlagun police received an FIR from the DME that fake appointment letters were allegedly being issued in the name of the DME with its seal and forged signatures.

Based on the information, an FIR was lodged under section 120-B/ 419/ 420/ 468/ 471 IPC at the Naharlagun police station and a special investigation team was formed to investigate the case.

During a house search of Bansal’s, incriminating evidence, including the seal on the fake appointment letters was recovered. However, she had fled to Delhi by that time.

The police team reached Delhi to arrest her, but she had left from Delhi via Rajdhani train service on the same day. Acting quickly, the team flew to Patna and intercepted the Rajdhani train and arrested the accused Bansal from Hajipur Station, Patna, Bihar.

Saikia was arrested from Gophur, Assam and the search for the third accused, Peri, is still on.

The police seized seals, fake appointment letters, money agreements and a list of 86 candidates, who had applied for the post of UDC, LDC, MTS and other posts.

A trunk full of documents has been seized, and transactions between Rs 2.5 lakhs to Rs 40 lakhs have been found in the case.

Further investigation is on to identify other accused and to ascertain the total amount involved.