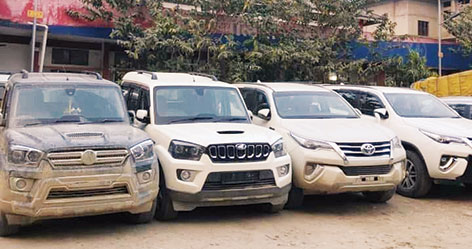 The five persons were separately arrested, starting from 9 February, and the latest arrest was of the DTO on 24 February.

The police have recovered four Mahindra Scorpios, three Hyundai Cretas, two Fortuners and one Maruti Suzuki Swift Dezire. A case (u/s 34/120-B/379/411/413/468 and 471) has been registered at the Naharlagun police station.

Capital SP Jimmy Chiram informed press persons that, while conducting motor vehicles checking at Kankar Nallah on 9 February, a white Fortuner (AR-02C-5813) was stopped at the naka point. Upon inspection, it was found that the engine and the chassis numbers of the car were tampered with, and that the registration certificate of the car, issued by the Yupia DTO, was also fake. The Fortuner was being driven by one Tamchi Kame, who revealed that he had purchased the car from Moni Gurung and Passang Tamang for Rs 12,50,000.

During the course of the investigation, Khogen Borah was arrested from Lilabari, and, upon his disclosure, three more cars were recovered from various locations of the capital region.

It is worth mentioning that all the cars’ owners were served notices under Section 41 A of the criminal procedure, stating that it was found that they had the knowledge that the cars were stolen.

Accused Khogen Borah revealed that he tried getting genuine registration certificates for the two stolen Scorpio cars for Rs 2,40,000 through one Raju Tamang.

Debia Tajam was arrested for procuring stolen vehicles from one Moti Ali, of Lakhimpur (Assam), and for preparing fake invoices with the help of Subhash Rai, who works at a cyber cafe in Nirjuli.

As per Debia Tajam’s statement, he has been in this business since 2006.

Four personal computers were also seized from Glimpse cyber cafæcopy; in Nirjuli, which was operated by Subhash Rai to create fake invoices.

It is learnt that the DTO along with Debia Tajam used to make backdated registration certificates, based on fake invoices. The DTO would then ask his staff to upload them to the Vahan portal, so that the names of the buyers would appear against the stolen vehicles.

All the accused are currently in judicial custody.