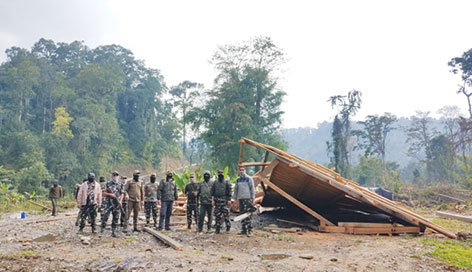 MIAO, 28 Feb: The Namdapha National Park and Tiger Reserve here in Changlang district is facing a serious threat from the ever-growing encroachment activities inside the park.

It is alleged that, after the start of the construction of the Miao-Vijaynagar (MV) road, people are starting to settle down along the MV road, inside the Namdapha National Park and Tiger Reserve. However, the encroachment is not new and is reported to have started years ago.

The growing cases of encroachment are posing a serious threat to the park and its habitat. “We are losing a great deal of a good animal habitat due to encroachment. The park is feeling pressure from all sides,” the official added.

With the improvement of the Miao-Vijaynagar road, the authorities of the Namdapha National Park and Tiger Reserve have stepped up patrolling inside the park. On Monday, a team led by Field Director Aduk Paron, along with Gandhigram Wildlife Range RFO Yowa Son Hade and field staff, conducted an eviction drive in between the 25 and 52 Mile areas inside the park. The team dismantled and removed three illegally constructed structures around the 40 Mile area. The eviction was carried out after the encroachers failed to respond to the notice served to them on 9 February to vacate the area by 25 February.

“We have zero tolerance towards encroachers, and I reiterate that such kind of eviction drive will continue until the biodiversity hotspot area is freed from illegal settlers,” said Paron.

The field director reiterated that “there are eight recognised encroached villages within the core/critical tiger habitat of the park, and resettlement dialogue will continue only with the villages recognised by the government.”

He strictly warned that action will be initiated as per the provisions of the Wildlife (Protection) Act, 1972 “if there is further attempt by new settlers to settle inside the park area.”

The Namdapha National Park and Tiger Reserve is a biodiversity hotspot, and is recognised throughout the world for its rich flora and fauna. Researchers and scientists from across the world visit the park to conduct research activities in coordination with the park authorities.