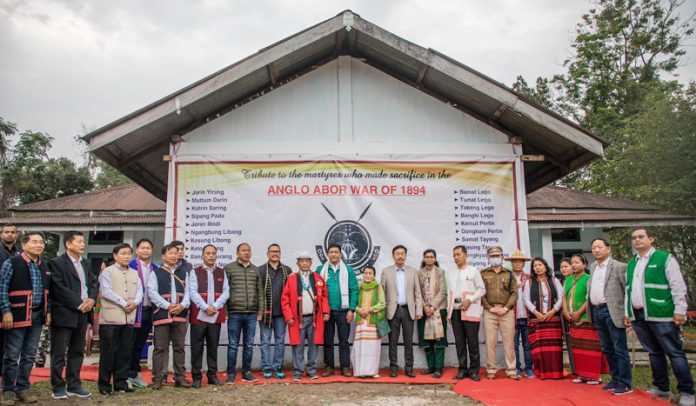 YINGKIONG, 5 Mar: Chief Minister Pema Khandu visited the Anglo-Abor war memorial in Dambuk on Saturday and paid rich tributes to the Adi martyrs who died resisting the British advance on the region in 1894.

It is said that the local Adis fought a fierce battle at the place against invading British troops by erecting a fort of stones, remains of which exist to this day.

Referring to the central government’s Azadi Ka Amrit Mahotsav, Khandu said “it is the right time to remember and pay tributes to those who fought for the freedom of the country and for their land.”

“I respect the people here for still preserving and protecting the remnants of the great Anglo-Abor war of 1894,” he said.

To the request for giving a facelift to the war site, which includes a museum, Khandu said that he would endorse the same to Deputy Chief Minister Chowna Mein, who heads the committee currently working on listing and documenting the state’s history of freedom movement and martyrs.

He assured to have flood protection measures initiated at the site, besides creating a proper museum infrastructure and a symbolic fort at the site.

Earlier, on Friday evening, Khandu felicitated and gave away prizes to the winners of the JK Tyre 4×4 Fury event. (CM’s PR Cell)