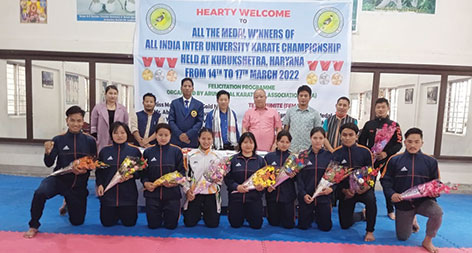 NAHARLAGUN, 20 Mar: Arunachal won one gold, two silver and four bronze medals in the All India Inter-University Karate Championship, which was held in Kurukshetra, Haryana, from 14 to 17 March.

All the players are practicing the shotokan style of karate under the National Shotokan Federation of India (NSKFA).

The Arunachal Karate-Do Association (AKA), led by its president Likha Tara, felicitated all the medal winners at a function organised at the AKA headquarters club here on Sunday afternoon.

Tara, who is also the president and chief instructor of the NSKFA, presented bouquets to the winners and congratulated them on their achievement.

Present on the occasion were, among others, NSKFA president Tai Hipik and NSFA general secretary S Deben Sharma.