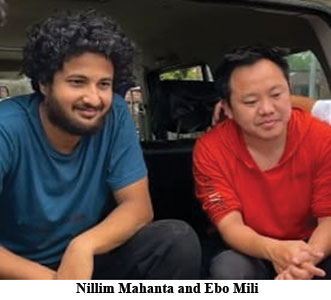 ITANAGAR, 28 Mar: A graffiti artist who was among the two persons arrested for allegedly defacing an artwork on the boundary wall of the civil secretariat here has found support in a youth organisation that has threatened to block roads for an indefinite period in protest.

The duo – advocate Ebo Mili and artist Nilim Mahanta – were arrested on Sunday. While Mili was arrested from his office chamber in Itanagar on Sunday afternoon, Mahanta was arrested from North Lakhimpur district in Assam at 8:30 pm on the same day.

They have been accused of defacing a portion of the mural on the civil secretariat wall in Itanagar by drawing a resistance logo on it and writing ‘No More Dams’ with black paint, ICR SP Jimmy Chiram said.

A case under the Prevention of Damage to Public Property Act, 1984 has been registered against them at the Itanagar police station, the SP said.

Several activists and locals have been opposing the Dibang Multipurpose Project in Arunachal over issues ranging from displacement and deforestation to loss of community land.

Taking exception to the police action, the Asom Jatiyatabadi Yuva Chhatra Parishad (AJYCP) on Monday announced that it would stage an indefinite road blockade if Mahanta is not released within 12 hours.

“This fascist government now fears everyone. They fear democratic protests, power of pen, free speech and artists… they are trying to suppress people due to that fear,” AJYCP general secretary Palash Changmai said on his Facebook page.

The outfit held a protest against the arrest in North Lakhimpur town during the day.

“Nilim has always raised his voice against any injustice through his paintings. If he is not released within the next 12 hours, we will start an indefinite road blockade against Arunachal Pradesh,” the outfit’s central committee assistant general secretary Saurav Das said.

“The police action is undemocratic and fascist. We demand that the artist be released and charges against him be removed,” he told reporters outside the Assam assembly.

Echoing him, Assam Jatiya Parishad president Lurinjyoti Gogoi said the action on the part of the Arunachal Pradesh Police was “vindictive, immoral and undemocratic.”

“People have the right to protest in a democracy and no power-hungry government can snatch this right,” he added.

Mahanta and Mili are currently in police remand for two days, Chiram informed. They were produced before the sessions court in Yupia, Papum Pare, on Monday.

Advocate Madan Mili, who is taking up the case for the duo, will be pleading for bail on Tuesday. The advocate said that the act for which they have been arrested does not attract Section 3 of the Prevention of Damage to Public Property Act, under which the two have been arrested, besides under Section 425 of the IPC.

“Only the court will decide,” he said.

Meanwhile, social media platforms are being bombarded with mixed reactions from the people. While many have opposed the act of defacing, many others have expressed support for the duo.

Author of The Shaman Woman & the Rooster, Jon Pebi Tato, took to Facebook and wrote: “There are many unwanted people in the society who deserve immediate arrest, but this guy should be given a brush and a white paint to not just erase his art protest, even the mural of the dam over the wall of harmony.” (With PTI input)