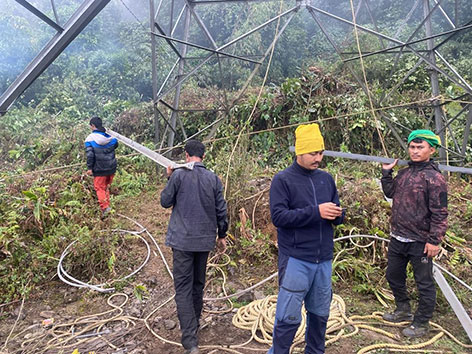 ITANAGAR, 28 Mar: East Kameng district has been without electricity supply for the past four days.

Seppa township and it’s adjacent villages have reportedly been without electricity since 25 March. The lack of power supply has hit the common people, particularly the business community and the government offices, hard.

“It’s been four days now and there is no power supply in Seppa township area. We rely on generators or solar panels to charge our mobile phones,” said Sama Pinda, a resident of Type-I Colony in Seppa.

When contacted, Seppa Power Division Executive Engineer Pura Kongku informed that “the R phase of the 132 kv tower is reportedly snapped after huge trees fell upon the 132 kv line in Khuppi area of West Kameng district due to heavy storm on 24 March evening.”

“Many trees fell on the line and damaged it at different locations, and still now the AE, the JE and staffers with two pickup trucks are at the site, trying to repair the line. Hope by now or by tomorrow power supply will resume,” Kongku said.

The EE further informed that laying the conductor and replacing the damaged cross arms to restore power supply have taken 3-4 days.

“Now, power restoration is still going on between Khuppi and Bana. Rain is slowing our works. It will be completed by tomorrow,” the EE asserted.