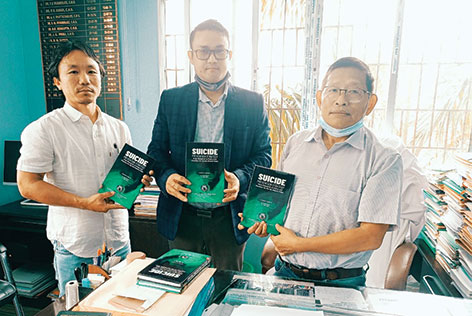 ITANAGAR, 29 Mar: A book on suicide prevention strategy, titled Suicide Prevention Strategy: From Research to Policy and Practice for the Idu Mishmi Tribe, co-edited and compiled by Dr Tarun Mene and Dr Rajiv Miso, was released at the office of the health services directorate here on Tuesday.

The book has been published by the Idu Mishmi Cultural and Literary Society (IMCLS).

A team of representatives of the IMCLS released the book

during an interaction programme with Health Services Director Dr Moromor Lego. The team apprised the director of the “public health issue of suicide among the Idu Mishmis.”

Dr Mene informed: “The book, which is a policy document, is a guideline for all the stakeholders, especially the state government and its various agencies, NGOs, CBOs, associations, etc, who could play a vital role in suicide prevention and intervention initiatives. It provides a brief introduction to the problem of suicide among the Idu Mishmi tribe and suggests broad areas of intervention strategies covering areas such as community renewal strategies, community education strategies, school strategy, youth and family strategy, interagency communication and coordination, and establishment of surveillance system.”

Dr Lego in his address commended the “timely release of the book,” and stressed on doing away with the social stigma attached to mental health in Arunachal Pradesh.

The team submitted a representation to the director for “immediate posting of health professionals, especially mental health professionals, such as psychiatrists and psychologists, and any other related measures that the department can take up to contain the loss of many productive lives due to suicide.”