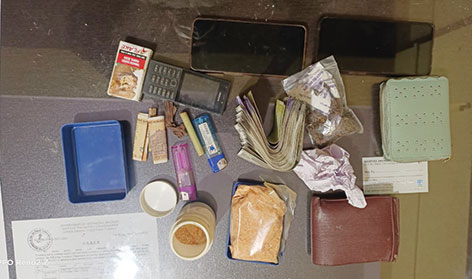 The ADS seized approximately 12 grams of suspected heroine, syringes, mobile phones, SIM cards and Rs. 34,820 from the possession of the arrested peddlers.

According to police, the first arrest was made on Tuesday afternoon by the ADS team led by DSP Ringu Ngupok.

The drug peddler was apprehended with suspected 2-3 gms of heroine, while he was returning from Namsai side in a motorcycle after purchasing the drugs to sell at Roing town, police said.

The ADS intercepted a car at Koronu police check-point on the Roing-Tezu NH and just after midnight made the second arrest.

Two men and two women were apprehended with 10 gms of suspected heroine and a cash amount of Rs. 34,820. They were bringing the drugs from Tezu-Namsai side to sell it in Roing.

The arrests were made in the presence of a magistrate, the police said.

Two separate cases have been registered under section 21(a) of the NDPS Act. Further investigation is underway.

While reiterating their appeal to the people to abstain from using drugs, the Roing police sought their cooperation in the fight against the drug menace.