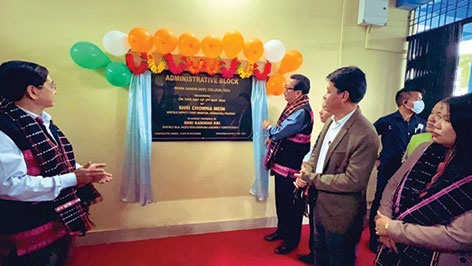 Addressing the people on the occasion, the DCM said that Lohit district is one of the most well-connected districts in the state.

“Tezu airport under UDAN scheme, the highways and other developments have opened new opportunities for the youth, especially in the tourism sector. With Parshuram Kund being developed under the PRASAD scheme, it will open a pilgrimage circuit with Bhishmak Nagar and Malinithan, which will generate opportunities for youth and locals,” he said.

The DCM further informed that “works have begun for naming of institutions after agency council members.”

He also assured to have a road constructed from Tezu to Bhekuliang under the RIDF, besides initiating flood protection measures in Tezu.

The Lohit ZPC and the Sunpura ZPM, along with Padmashree awardee Satyanarayan Mundayoor, the DC, HoDs, and others were present on the occasion. (DIPRO)