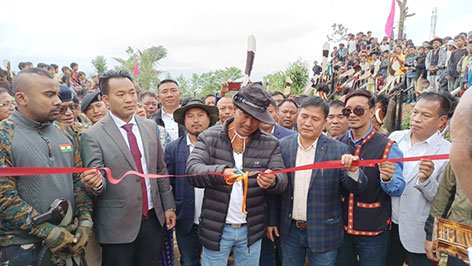 PONGCHAU, 3 May: RWD Minister Honchun Ngandam called upon the Wancho community to preserve their culture and heritage “for protection of identity.”

Addressing the gathering during a log drum installation ceremony in Khasa village in Pongchau circle of Longding district on Tuesday, Ngandam said, “The practice of log drum installation needs to be preserved and promoted, even in present days, as it is attached to our culture, which is our identity.”

The minister, who is also the Pongchau-Wakka MLA, said that the state government is working for the wellbeing of the people and the development of the state. He appealed to all sections of the society to work together for a better tomorrow.

“Implementation of any development scheme cannot be possible without proper support and cooperation of the people,” the minister said, and called upon the people to “shoulder their responsibility with determination for development.”

Terming the drug menace a deadly phenomenon, the minister said, “Time has come to work together to get rid of such menace.”

Longding DC Bani Lego also called upon the people not to forget their tradition and culture, “which is the main source of identity.”

The DC also suggested measures to avoid fire accidents in the district, and appealed to the parents to guide their children, so that the children do not fall prey to drug addiction.

Among others, Longding ZPC Lohpong Wangham and the chief of Khasa village also spoke.