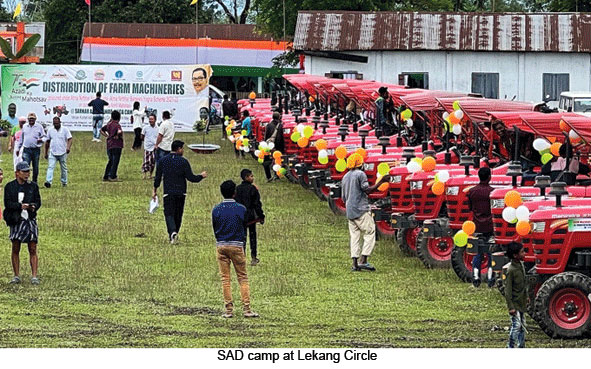 ITANAGAR, 4 May: Sarkar Aapke Dwar (SAD) camps were organized across the state as part of the ‘Azadi Ka Amrit Mahotsav’ (AKAM) on Wednesday, during which tractors, power tillers etc were distributed to the beneficiaries under various schemes. 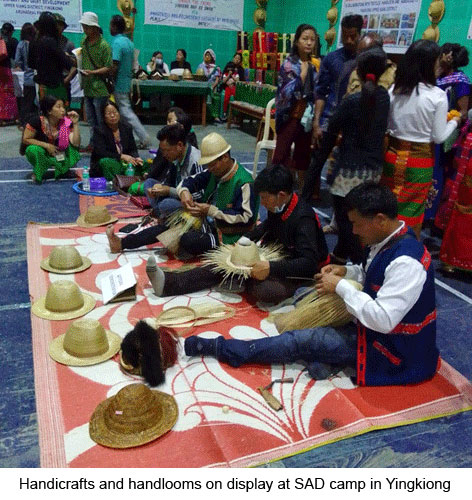 Highlighting the various people-friendly programmes and policies of the government, Mein said, “All the initiatives in the budget 2022-23 have been taken for the common citizens under the philosophy of ‘No citizen be left behind.’

He said that fund allocation for conducting SAD camp has been increased from Rs. 2 crore to Rs. 7.5 crore in the budget.

Stating 2022 as ‘Year of e-Governance,’ Mein said that 22 e-Governance initiatives will be rolled out this year.

Speaking about initiatives under the Atmanirbhar Arunachal, the DCM said that ‘Har Ghar Green House’ has been rolled out which will benefit the people largely.

On promotion of bee keeping, Mein said that he will soon be organizing a workshop in the district so that people can learn and avail the benefits of bee-keeping.

He said that the state government has ensured investment of nearly Rs. 14 crore in the form of bank credit provided to SHGs.

“The state government has decided to support 500 Self-Help Groups promoted by ArSRLM with an amount of Rs.1 lakh each which would be maintained as a fixed deposit in the account of the concerned SHG,” Mein said.

Further, the state government is supporting 300 primary level federations under the DAY NRLM with a grant of Rs.2 lakh each for procurement of good transport vehicles, he added.

In Itanagar, around 500 citizens benefited from various services provided by govt. departments during the SAD camp conducted at GHSS ESS Sector here.

The department of food and civil supply issued 28 forms for new ration and LPG connection while 19 beneficiaries were issued various forms including learner license, new vehicle registration etc. by the office of the district transport officer.

The Jan Suvidha branch issued 45 nos. of ST, PRC, trading licence and forms for AADHAAR enrolment and correction were issued.

A total of 142 beneficiaries were also registered under various services like registration of health ID, CMAAY, MCD screening, PMJAY enrolment etc. by the health department.

Awareness on various issues were also carried out by the capital police, the department of WCD/ ICDS, disaster management, education, APSLSA, Women Helpline 181 and others.

Later in the day, the Capital Itanagar DC Talo Potom along with his team of officers inspected the renovation works being carried out at Govt Higher Secondary School, ESS Sector here which has been funded by district administration.

In West Siang, the camp at Kombo Govt Secondary School was inaugurated by MLA Kento Jini in the presence of DC Penga Tato and others.

Jini highlighted the various welfare activities of the Pema Khandu-led BJP government in the state, while DC Penga Tato urged the villagers to avail the services provided during the camp.

In Lower Siang, the district administration organized the camp at Chidu-Chigo general ground in Likabali.

During the camp, five tractor, four power tiller, two rotary tiller, five PDM were distributed to the beneficiaries under the Aatma Nirbhar Krishi Yojana 2021-22. Twenty-seven departments participated in the mega camp, which was inaugurated by Likabali MLA Kardo Nyigyor in the presence of DC Marto Riba, SP KP Singh and the PRI leaders.

In Pasighat, MLA Kaling Moyong, who inaugurated the camp at Balek Secondary school in the presence of DC Tayi Taggu, highlighted various developmental initiatives taken up by the state and the central governments.

Moyong said that SAD is a vision of Prime Minister Narendra Modi to bring services of government departments and banking institutions at people’s doorsteps. He urged the officers, GBs and PRI leaders to create awareness on the various schemes and services for availing optimum benefits by the people under one roof at their doorsteps.

In Daporijo, Upper Subansiri, the SAD camp was inaugurated by MLA Taniya Soki at Sinyik Hall, while in Yingkiong, Upper Siang, it was inaugurated by DC Shashvat Saurabh at Multi-purpose Community Hall, in the presence of ZPC Lumgeng Litin.

In Lower Subansiri, 1127 persons from Loth, Linia, Taderko, Tajgi, Jath, Balam villages of Upper Yachuli benefitted from the SAD camp held in the Government Middle School at Loth.  The camp was inaugurated by DC Somcha Lowang.