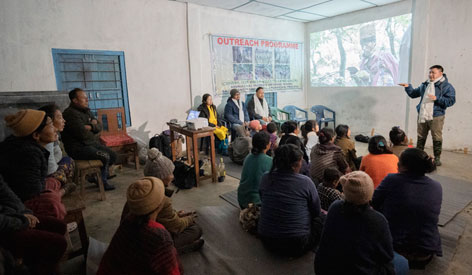 LUBRANG, 8 May: A team of researchers from Rajiv Gandhi University’s Centre for Endangered Languages organised an outreach programme on ‘Awareness of mother tongue’ for the Brokpa community of Lubrang village in Dirang circle of West Kameng district on Sunday.

The programme, conducted in collaboration with the North Eastern Council, was part of a month-long field research under the ongoing project on ‘Documentation of endangered language, oral narratives, and cultures of lesser-known tribal communities of Arunachal Pradesh’.

The research team consisted of four research associates and one research assistant. Two documentaries, titled Fading Tongue of the East? and The Songs We Sing, The Drums We Beat on the Meyor and Kaasik (Nocte) communities, respectively, both directed by Kombong Darang and produced by the CFEL, were screened at the community hall here.

During the programme, research associate Dr Tame Ramya Tarh said that a language is not just a tool for communication but a vehicle for culture and heritage. “It symbolises one’s identity, safety, grounding, and birth,” he said, and asserted that continuing to speak in one’s mother tongue at home and in village domains is the most effective measure to safeguard it.

Citing the National Education Policy’s objective to promote mother tongues, he urged the panchayat members and community-based organisations of the village to request the government to introduce Brokpa as a third language in schools, along the lines of other communities of the state.

Kaling Dabi highlighted the vulnerability of the languages of Arunachal. He urged the community to “cooperate in research endeavours in future as well” and informed the villagers that all output of the research shall be shared with the community.

Brokpa is one of the lesser-known languages under the Monpa ethnic identity of Arunachal. The UNESCO’s Language Vitality and Endangerment Framework (2003) classified the Brokpa (Monpa) language as a ‘critically endangered language’, based on a smaller number of speakers. Their culture is on the verge of extinction since a majority of the community members are slowly denouncing their ancestral customs and traditions,” a release added.