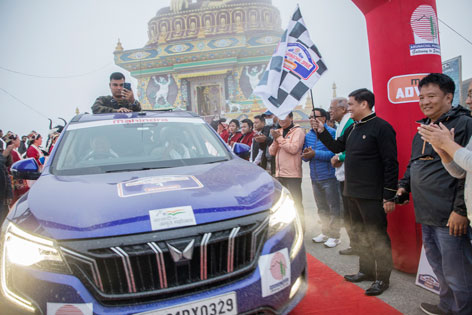 TAWANG, 15 May: Chief Minister Pema Khandu on Sunday afternoon flagged in the 2nd edition of the Trans-Arunachal Drive here, marking the conclusion of the 2000-plus kms adventure drive, supported by the Mahindra Group.

The drive had earlier been flagged off by Deputy Chief Minister Chowna Mein from Pangsau Pass in Changlang district.

Speaking to the participants – a conglomeration of off-road drivers, media persons, vloggers, bloggers, social media influencers and exponents of tourism industry – Khandu expressed optimism that “they must have got the real taste of what Arunachal offers in the tourism sector.”

He said that, when the Northeast is mentioned, most people in the mainland visualises it up to Assam, which in fact is wrong.

“People don’t have a clear concept of Northeast. What they think or visualise is much different from reality. This is a region with so much to offer, but due to scant media exposure, it remains unexplored,” Khandu observed.

He said that “absence of mainstream media in the region, particularly in Arunachal Pradesh, the potential it possesses in the tourism sector still remains hidden.

“That was the main reason behind this drive – to offer influencers, media persons covering adventure and tourism sectors and independent vloggers and bloggers something which they personally cannot resist,” Khandu said.

He said that Arunachal is geographically the largest state in the region, which many people do not know.

Delving more on Arunachal’s diversity, Khandu claimed that “real Arunachal lies beyond the point where the road ends.”

“In any case, by now, you must have realised that, when it comes to take adrenaline pumping drives and adventures to the next level, Arunachal Pradesh is the place. Our state has the right climate, right terrains, right roads and the right people needed for a drive of a lifetime,” Khandu said, adding that he expects that the drive would expose to the world the state’s potentials.

He informed that, “as India is evolving from the Covid pandemic, Prime Minister Narendra Modi started the campaign ‘Dekho Apna Desh’ to revive domestic tourism. Taking the cue, the state government pushed the ‘Dekho Apna Pradesh’ to encourage its citizens to travel across their own state and revive the tourism industry that had taken a beating due to long periods of lockdowns.”

Emphasising on responsible tourism, Khandu urged the participants of the drive to promote it.

“Please tell your readers, subscribers, followers and fans to follow responsible tourism. Mother Nature is very sensitive to pollution. So tell them, when you visit Arunachal Pradesh, take back beautiful pictures and great memories but leave behind just footprints,” he added. (CM’s PR Cell)