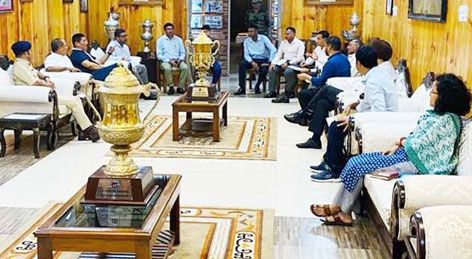 Lower Siang DC Marto Riba and apprised him of the flood caused by perennial streams and rainwater flowing down the hills in Arunachal during monsoon.

Assam MP Pradan Baruah and MLA Bhuban Pegu also attended the meeting and sought help from the Lower Siang administration in preparing a joint master plan to control flooding by the perennial streams.

During the meeting, the participants resolved to engage the Border Roads Organisation and engineers from both the states to conduct a technical survey.

The team will also prepare an action plan to drain out clogged water from Likabali and Silapathar township areas and regulate the perennial streams.

They also sought help from the Indian Army and the IRBn stationed in Likabali.