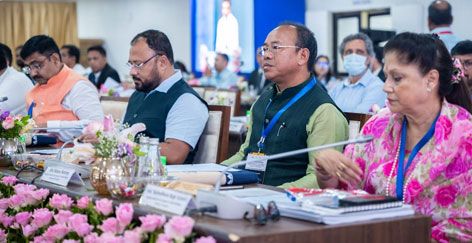 ITANAGAR, 25 Jun: Sports & Youth Affairs Minister Mama Natung said that the state government has formed a task force to prepare a roadmap for the upcoming 2024, 2028 and 2032 Olympics.

Under the ‘Mission Olympic’ programme, elite athletes will be given special training and coaching by foreign coaches and will also have separate nutritionists, physiotherapists and sports psychologists. This scheme will commence from this financial year, Natung said during a national conference on sports in Kevadia, Gujarat, on Friday.

Anurag Thakur and sports ministers from all the states.

Natung said that the central government has sanctioned 54 small Khelo India centres to be developed in various districts across the state. He said that these centres are in the final stages of completion and will be completed within two years.

Natung also informed that there is one state-level Khelo India centre at the Sangay Lhaden Sports Academy (SLSA) in Chimpu, and that “the results till now are quite encouraging.”

He also said that a national centre of excellence for weightlifting has also been established in the SLSA complex.

“The SLSA in Chimpu and the State Sports Academy in Miao in Changlang district are two sports academies in the state where students in the age group of 10-16 years from the districts are enrolled after selection trials,” Natung said.

He also stressed the need for “special parameters and guidelines for implementation of Khelo India schemes in the northeastern states,” considering the region’s topography, which, he said, is geographically isolated from the rest of India.

During the meeting, the participants discussed implementation of Khelo India programmes and infrastructures being developed in various states.