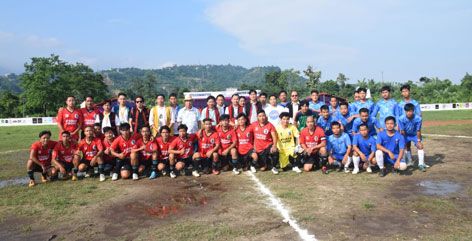 Addressing the inaugural function, Arunachal Olympic Association general secretary Bamang Tago, who kicked off the tournament, said, “The Adi community not only celebrates its festival with full enthusiasm but also lays full emphasis on sports activities alongside festival celebration.”

He said that the Adi community “is playing a leading role and acts as a role model when it comes to conducting and organising any sporting activities with full discipline and professionalism.”

“The interest, participation and enthusiasm I have seen among children, parents and elders in the Adi community when an event takes place serves as a beacon for the existing unity and oneness. Such efforts will go a long way in preserving the age-old culture and tradition, including promoting sports culture among the youths,” Tago said, and urged parents to encourage their children to take up sports as a profession.

SFCCI-2022 sports secretary Okit Paling informed that 16 teams are participating in the tournament, which will continue for about a month along with other sporting events such as volleyball, tug-of-war, etc.

Olik Tayeng of Abor FC was declared the man of the match.