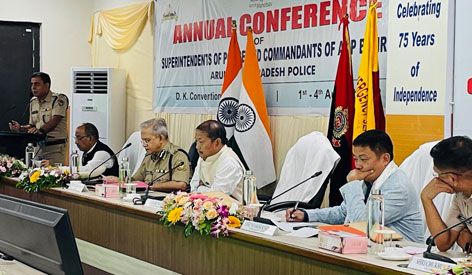 ITANAGAR, 1 Aug: “We are all accountable for the development of the state because law and order is a prerequisite for any development to take place,” said Home Minister Bamang Felix during the inaugural function of the annual conference of superintendents of police and commandants of the AAPBn/IRBn at the DK Convention Hall here on Monday.

The four-day conference, themed ‘Building professionalism through basic policing’, is being attended by SPs and commandants from across the state. Officers of DSP rank and others concerned are participating through videoconference.

the way forward will be discussed during the conference.

The home minister urged the officers to “consider entire length and breadth of the state as their work area and refrain from seeking transfer and posting at their areas of choice.”

Pointing out that the Arunachal Pradesh Police will be celebrating its 50 years of establishment this year, Felix exhorted the officers to “introspect on its achievements and shortcomings, and introduce changes wherever required.”

Urging the officers and officials concerned at the police headquarters (PHQ) to be “clear on vision and approach,” he advised them to “send proposals for development of infrastructures with proper justification and financial implications, so that the same can be pursued without any setbacks.”

Regarding the issue of drug menace, the minister informed that a proposal for establishment of a state-of-the-art forensic science laboratory “is being pursued, so that the drug traffickers can be chargesheeted with the backup of forensic evidence.”

Expressing concern over the influx of outsiders into the state, Felix directed the police personnel to strictly check ILPs at all entry points and ensure that there is a local guardian who can vouch for the entry and exit of such outsiders.

The minister further called for full-fledged implementation of CCTNS and e-Office at the PHQ.

The home minister’s adviser Nyamar Karbak stressed on “SPs making themselves available and visible at their respective posting places,” and urged them to “make visits to the schools and colleges also as a role model for youths.”