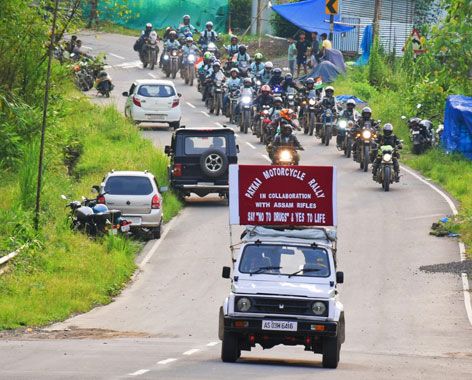 LONGDING, 1 Aug: The three-day Patkai motorcycle rally organised by the Assam Rifles deployed in the TCL region culminated at Pangsau Pass on Monday.

The rally was flagged in by Nampong MLA Laisam Simai in the presence of officials of the civil administration, police and heads of various civil society organisations.

The rally saw the participation of riders from two Wancho motorcycle clubs – Roaring Rangers and Head Hunters – and soldiers of the Assam Rifles guarding the Indo-Myanmar border in the TCL region.

The bikers travelled over 400 kms, passing through the towns and remote villages of Longding, Khonsa, Changlang and Jairampur.

They made an earnest endeavour to reach out to all sections of the society living in the region to create awareness about the ill-effects of drug abuse, under the Nasha Mukt Bharat campaign and the Azadi Ka Amrit Mahotsav.

The event received overwhelming response from the people of the region, who pledged to fight against drug abuse.

The locals lauded the Assam Rifles for taking the initiative to generate awareness among the people to make the TCL region drug-free. (DIPRO)